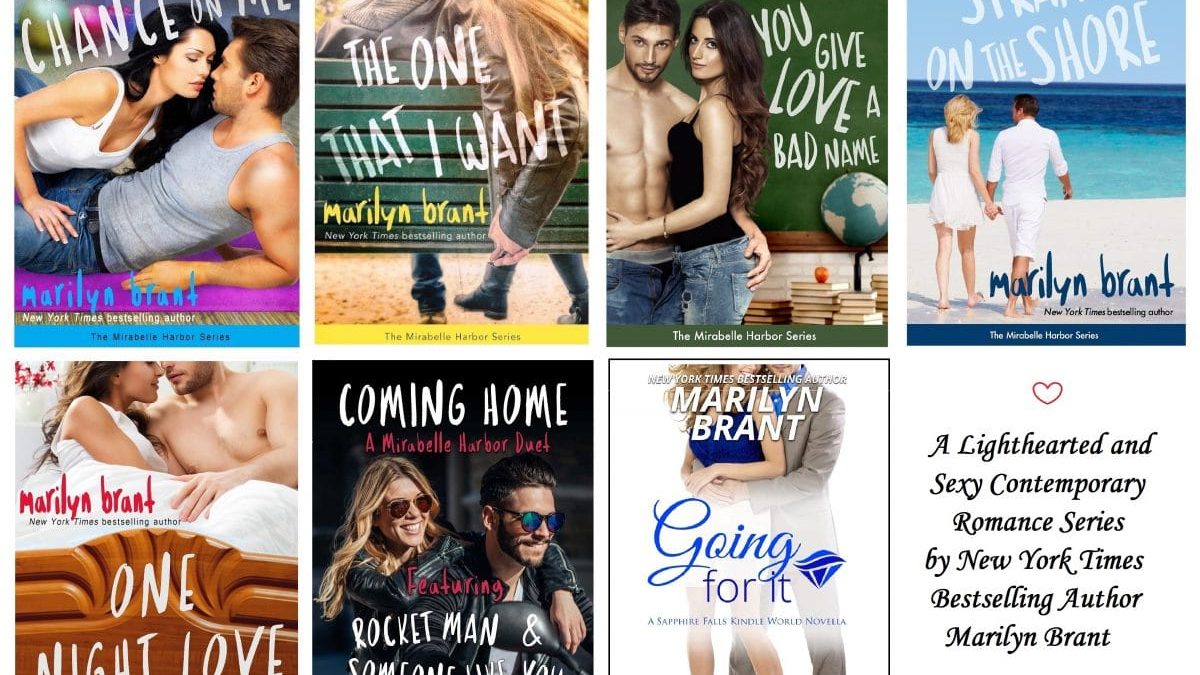 A couple of years ago, I had the pleasure of blogging on STC! about beating out a book series. It was just after the release of the first two stories in my new Mirabelle Harbor series, and it was both a very exciting and an absolutely terrifying time in my fiction-writing career. For the first time ever, I was undertaking the plotting and drafting of what I hoped would become a seven-book contemporary romance series (which turned into eight novels/novellas by the end), and all of these were to be published within a two-year time period.

The only writing tool that eased my fear in the early stages was Blake Snyder’s trusty beat sheet. I figured if I could use it to successfully structure a single book, I ought to be able to use it to help me through the knotty structural planning for a bunch of related, standalone books…right?

Because here was the big, most important issue I faced during the plotting of a long series: I knew I needed a structural tool that was both organized enough to be truly helpful in creating the underlying arcs of these multiple stories and, yet, it also needed to be fluid and flexible enough to handle the inevitable changes that would arise while the actual writing was in progress.

I’m thrilled—although not at all surprised—to say that the beat sheet worked beautifully for this purpose. It’s a remarkable gift for novelists as well as for screenwriters. Not only did the individual beats provide the organization I needed for each book and the collection as a whole but, because I keep my copies of Blake’s Save the Cat!® Goes to the Movies and Save the Cat!® Goes to the Indies within arms’ reach of my writing desk (I’m not kidding—they are literally less than two feet away from my computer, always), I could pore over his insights on “Buddy Love” stories while I was at work on the series. As a romance author, I found some extremely helpful guidance there, too. [Side note: In gratitude, I named the hero of You Give Love a Bad Name (Mirabelle Harbor, Book 3) after Blake… an honor I can only hope he would’ve found funny!]

Love stories are about personal transformation—a change initiated to a large extent by the desire to be in a romantic relationship with another person. Everyone knows that a romance novel is “predictable,” in the sense that the couple will end up together and there will be a guaranteed happily-ever-after sort of ending. That very promise is one of the reasons why many people choose to read this genre.

But although romance readers know before even flipping to page one of the book that the story couple will eventually start dating/hook up/get married, it’s the how they do it that matters. So finding those areas of particular uniqueness—within the beats—for each given couple becomes increasingly important, especially in a series where you might showcase the love stories of several siblings and you need to distinguish deliberately the core differences between them.

Now that the final book in my series, Coming Home: A Mirabelle Harbor Duet, has been released, I’ve been better able to reflect on the plotting process as a whole and what stood out as the most critical parts of structuring the stories. In retrospect, while all of the 15 original beats were necessary for me to complete each romance in the series, there were a few beats that proved especially useful for keeping track of long-term, multi-book threads and infusing each storyline and character with that desired uniqueness. I hope those of you working on a series of your own might find this helpful, too.

Quoting Blake’s descriptions below from Save the Cat! Goes to the Movies, Introduction (pp. xviii – xix). The words in parentheses are mine:

Theme Stated – Usually spoken to the main character, often without knowing what is said will be vital to his surviving this tale. It’s what your movie (or novel) is “about.”
Fun and Games – Here we forget plot and enjoy “set pieces” and “trailer moments” and revel in the “promise of the premise.”
Dark Night of the Soul – That part of the script (or book) where the hero has lost all hope…

Let me look at each of these more closely.

THEME
Given that Buddy Love stories focus on the search for completion and personal transformation due to the influence of another person, when it comes to romances in particular, “love conquers all” might be a fitting theme for every single one of them. However, as Blake wisely pointed out, the theme that’s imparted to the main character is often vital to his/her surviving the story.

In the case of a love story, that means emotional survival—navigating the rollercoaster of feelings that comes from confronting one’s fears of intimacy and fighting the obstacles every individual brings to a potential relationship. So, while love could, indeed, conquer all—at least eventually—a more specific theme might be used in tandem with that general one; a theme that’s tailored to the particular quirks of the characters in question.

For example, a rather prideful hero and a prejudiced heroine (thank you, Jane Austen!) could both be told by secondary characters to “take care in making judgments because one’s first impressions might be wrong.” The relationship drama of an opinionated and stubborn pair like this is made all the more poignant when there’s a direct parallel between the theme and the hero/heroine’s personal flaws. The protagonists aren’t able to pull through their tale of love and reach a happy conclusion without having to deeply examine their hearts and minds first… and to reassess not only the other person’s motives and behavior but, also, their own.

Alternately, a strong romantic theme like “anything worth having is worth fighting for” might give a protagonist with a history of backing away from commitment the opportunity to prove that he/she was willing to go to bat for this new relationship. The specifics of the theme can, therefore, be used to reflect the specificities of the characters themselves and deepen the conflict. Even in a sea of romance manuscripts where everybody is falling in love, a highly customized theme can make the love story of your two characters stand out.

FUN AND GAMES
This is where significant character details reign! Where the author has the opportunity to really capitalize on character differences and make the “fun and games” unique to the protagonists.

In real life, if a physicist, a radio DJ, and an ex-hockey player were to walk into a bar, these guys might all just order a beer and glance around for an attractive single person to meet. In fiction, however, we get to use their professional skill sets to our advantage to make their characters more memorable. And when any one of these potential heroes invites his romantic love interest on a date, for instance, we can truly illustrate their individual personas, talents, and knowledge by the way they filter the world through their points of view. The things they do for enjoyment, the way they interpret any given situation, the metaphors they use, what makes them laugh—all of these are incredibly insightful peeks into the psyche of a character, and they can’t be authentically used with someone else. These types of character idiosyncrasies aren’t readily interchangeable, not even if the two heroes in question are close friends. Not even if they’re identical twin brothers.

As the author, when you carryover a character in the series from an earlier book to a later one, being fully grounded in the kinds of activities that character does for fun is a sort of literary shorthand, much like distinctive dialogue tics or expressive gestures. I found this knowledge helped me immediately clarify the way a character would occupy the space in a scene, the things he would notice, the types of comments he might make. Details like these became more crucial the further I wrote into the series because readers had come to know the individual characters from when they “starred” in their own book. If a character made an appearance in a later book, they needed to be consistent. So, I felt it was imperative to know who they were—not just during times of conflict and emotional angst—but also when the pressure was off and they were having fun.

DARK NIGHT
And, finally, there’s that necessary point of despair and the character revelations it affords. All of us have experienced this in our own lives and it can be messy, unclear, and not remotely sensical. But, again, with novel writing it’s all about the particularities of an individual character. What he/she does in these times of darkness must reflect what is unique about them. It must reinforce what we know to be true about their beliefs, their hopes, and their deepest fears. Perhaps their hopelessness in this moment comes from not being trusted or not being taken seriously by the person they love. Or, maybe, it’s all about being abandoned or betrayed. Whatever the issue is that this character wrestles with most is an exclusive and privileged clue we give our readers into the secret soul of this distinct (albeit fictional) human we’ve created.

But it’s also at this stage in our storytelling where our time spent structuring and plotting seriously pays off. Where even the predictable elements of a genre novel get swept aside. Where our main characters, who have revealed their souls, have to work for their happily-ever-after ending—and, in doing so, our readers must work right along with them. The effort bestows both with an undeniable sense of accomplishment: We made it through! And we did it together... This cements the sense in the reader of really knowing our characters. Our protagonists should feel real and fully formed to our audience now.

One of the greatest compliments I’ve received as an author is when a reader says that one of my characters feels like a friend. But that doesn’t happen magically. As writers, we breathe that 3-D character into existence by placing vital information about them into the beats as we plot their stories.

As always, many thanks to Blake’s genius for making the beat sheet available to us, and all the best to each of you as you work on your novels. If you have a chance to comment, I’d love to hear your thoughts on which beats you find especially helpful as you plan out your stories and create your most memorable characters!