Save the Cat! Tips for Adapting Your Novel Into a Screenplay 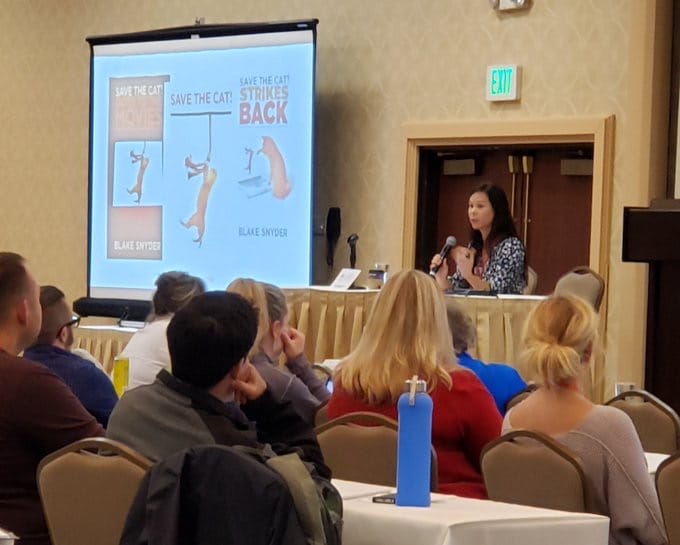 Last weekend I had the pleasure of speaking at the 2019 Connecting Writers with Hollywood conference in Seattle (hosted by 5×5 Productions and in association with the Pacific Northwest Writers Association). My session offered an overview of Save the Cat! principles and how to approach adapting a novel into a screenplay—all in about an hour. (No sweat!) Today I thought I’d share some of what we covered in case you weren’t able to attend the live conference.

In the session, one of the main points I tried to impart was this:

That’s a challenge I see facing a lot of the writers I consult with or work with in workshops who are trying to adapt novels (or true events) into movies. Novels can juggle multiple storylines, timelines, character perspectives, subplots, etc., all much more easily than movies.

So when we’re trying to adapt existing source material into screenplay form, we almost always need to simplify. Movies are much more likely to focus on one clear spine running through the movie from beginning to end. One main problem or conflict.

And if you think about it, that makes sense. We’re meant to consume movies in one sitting. That’s the ideal situation.

If we’re going to watch a movie in one sitting, we’re really seeking one story. We’re primed to be told one clear story from “once upon a time” to “and they lived happily ever after,” and that’s it.

But that means if you’re adapting something any more complex than a fairytale, you’ll probably need to simplify, focus, and condense in order to find that clear spine.

How do you find the spine?

Movies tell simple stories, and those stories tend to be about one person’s attempt to accomplish one thing and the transformative experience that is for them.

That’s why, in the Save the Cat! workshops, we always start with the essentials. These are the pieces that the story’s spine emerges from: the hero, the goal, the antagonist or main force of opposition, and what’s at stake. Together those four things form the foundation for the story.

The spine itself is created by the hero pursuing the goal despite the antagonist getting in the way, and with something big at stake if the hero fails. And in the workshops, we start building the spine by figuring out the 6 Pillar Beats of the story: Opening Image, Catalyst, Break into 2, Midpoint, Break into 3, and Final Image. Which, again, makes sense. We’re building the story spine, so we start with the load-bearing pillars.

Those 6 Pillar Beats showcase those foundational elements and show us the story in a nutshell by introducing us to the hero, showing why and how the hero pursues the goal and how the antagonist gets in the way, how the stakes are raised, what changes for the hero, and whether the hero succeeds or fails. Believe it or not, all of that shows up in a well-constructed set of 6 Pillar Beats.

As a quick example, let’s take the movie Bridesmaids:

Our hero, Annie, sneaks out of bed to put on makeup and brush her teeth before her booty call guy, Ted, wakes up. The whole scene is one big humiliation, which is the “before” snapshot of Annie and her life.

Annie’s best friend announces she’s engaged and asks Annie to be her maid of honor. For Annie, this is an opportunity to maintain her friendship with Lillian, which is really the only positive thing left in Annie’s life.

Annie has met her competition—antagonist Helen—and the other bridesmaids and commits to Lillian that she’ll take on Maid of Honor duty despite her reservations. So that’s what we’re going to be watching in this movie: Annie pursuing her goal of being her best friend’s maid of honor and how that experience transforms her. That’s the story here.

Annie ruins Lillian’s bachelorette party trip in spectacular fashion. Lillian then removes Annie from her position as maid of honor, making it seemingly impossible for Annie to achieve her goal.

After further hijinks and seemingly destroying her friendship with Lillian, Annie must forge a new path. We see this as Annie says goodbye to Ted the booty call guy for good, which shows us she’s now taking more responsibility for her actions and trying to move forward in a new way.

Annie watches the bride and groom leave—a goodbye moment confirms to us that Annie has restored her friendship with Lillian—and then Annie drives off with Officer Rhodes, a guy who she can be herself around, who knows the real her and likes her as she is. That’s the change that’s occurred: Annie no longer has to lie and pretend, she’s ready to go after what makes her truly happy.

When you’ve figured out the 6 Pillar Beats, it’s easier to see what else from the existing source material belongs in the story. Because everything else in the movie should support and connect back to the spine. If it doesn’t, it’s time to give it a hard look and ask if it really needs to be in the movie.

Remember, movies aren’t built for tangents. They’re one-sitting stories. So as we work through the remaining beats of the BS2, we want to make sure the audience can follow the bouncing ball and can see the spine from beginning to end. Otherwise they won’t feel like they’re getting one focused story.

Think about how you feel when someone at a party is telling you a story and they go off on a tangent and lose sight of the original story. It makes you uncomfortable or irritable or impatient, right? You get restless and wonder where it’s going. The pacing feels off. The story feels like it’s meandering or, worse, pointless.

It’s really very much the same in movies. As the audience, we’re sitting there, waiting to be told that one story. And we want it to feel like the story is well told: it’s focused, it’s deliberate, it knows what it is and what it needs to do. We’re not there to indulge the movie doing whatever it wants to do; we want the movie to entertain us.

So plan from the beginning to give your audience the entertaining story they want, and start with the foundation to make sure your story is solid from the ground up.

About the Beats, Success Stories, Tips and Tactics

Save the Cat! Sits Down with NBC