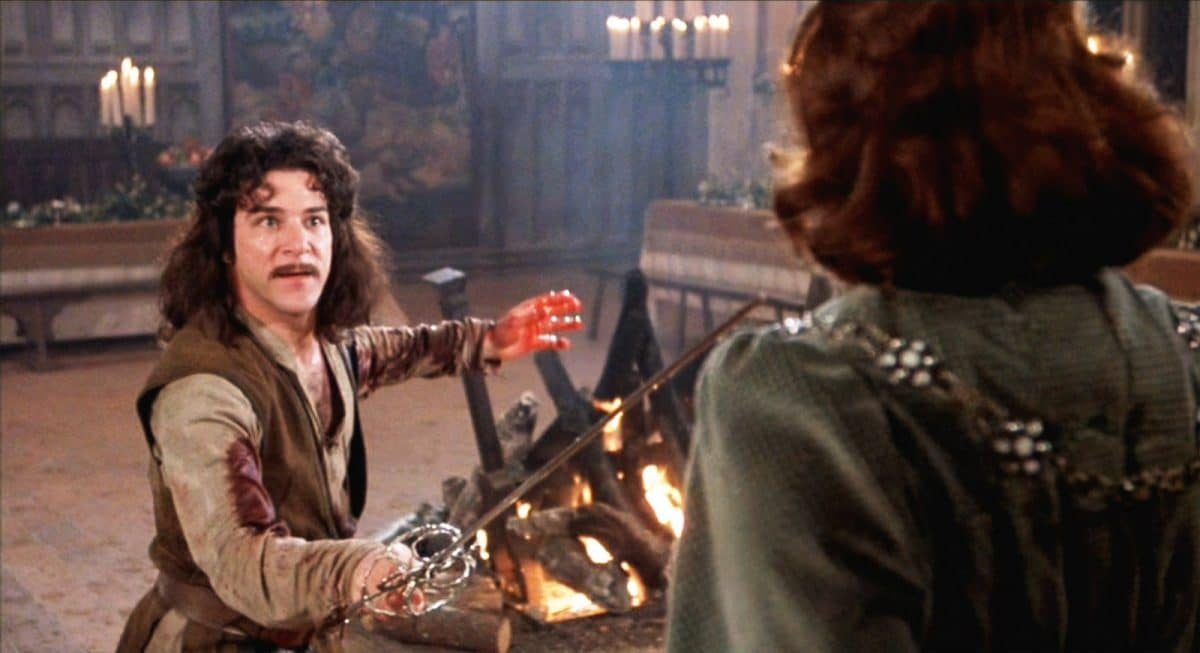 "Hello, my name is Inigo Montoya. You killed my father. Prepare to die." 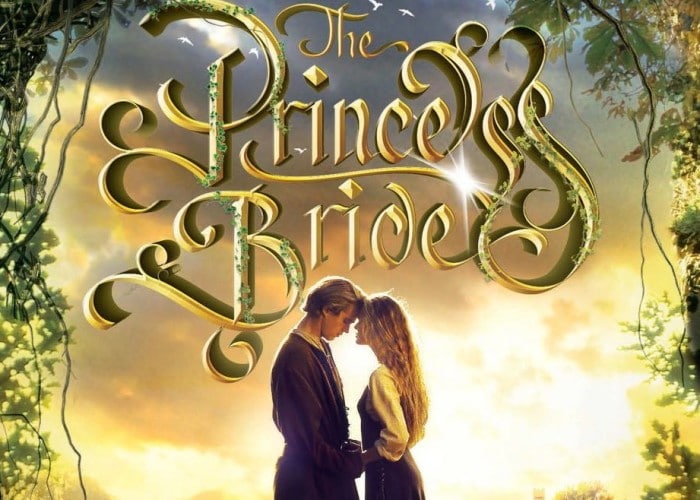 How does The Princess Bride hit Blake Snyder’s story beats? Here is the Save the Cat!® beat sheet for the film:

Opening Image: We open on young Fred Savage in the role of The Grandson. He’s sick in bed and not excited to hear his grandfather is coming to visit. Grandfather (Peter Falk) arrives and wants to read him a book. “I’ll try to stay awake,” says Grandson.

Set-Up: The story Grandfather reads is about the beautiful Buttercup aka The Princess Bride (Robin Wright) and her farmhand Westley (Cary Elwes). Whenever she orders Westley to do chores for her, he complies and answers, “As you wish.”

Theme Stated: Much to the Grandson’s dismay, we see what this story-within-a-story is about: kissing. But that’s just the tip of the iceberg. Buttercup and Westley are in love, and the movie explores the idea of true love and the things we do in the name of love.

Set-Up (continued): Westley is called away and his ship is attacked by pirates. Broken with grief, Buttercup vows to never love again.

Cut to five years later, and Buttercup has been chosen by Prince Humperdinck (Chris Sarandon) to be his bride. She’s not happy about it and doesn’t love him, but has no choice.

Catalyst: Before the wedding, Buttercup is kidnapped by three outlaws: Vizzini (Wallace Shawn), the enormous Fezzik (Andre the Giant), and a Spanish fencing master named Inigo Montoya (Mandy Patinkin). The trio intends to cast the blame on a neighboring country so as to start a war.

Debate: As they’re sailing away with Buttercup, they notice they’re being pursued by another ship. Soon it’s revealed they’re being followed by a mysterious masked Man in Black.

As the other two outlaws get away with Buttercup, Inigo waits at the top of the Cliffs of Insanity to kill the Man in Black.

Growing impatient, Inigo helps the Man in Black to the top of the cliffs, then offers him a chance to catch his breath before they duel to the death.

B Story: During this break, Inigo tells the story of his father’s murder by a six-fingered man, and Inigo’s lifelong quest for revenge. This is another angle on the theme of true love—what one might do once love is lost.

Fun and Games: Westley continues on his journey. He defeats his next obstacle, the giant Fezzik. But we see Prince Humperdinck and his men have picked up Westley’s trail and are now in pursuit as well.

Westley next defeats Vizzini in a battle of wits, tricking the outlaw into drinking poison. Westley frees Buttercup, but doesn’t reveal his own identity right away. First they debate whether she was loyal to her true love. She guesses his identity to be the Dread Pirate Roberts—the man responsible for Westley’s “death.” But when Buttercup pushes him down a hill and he calls out, “As you wish…” she knows she’s made a mistake and follows down after him. When they’re reunited, Westley tells her even death can’t stop true love.

The Prince and his men catch up to them, but Westley and Buttercup escape into the Fire Swamp. There they battle fire geysers, quicksand, and giant rodents.

Midpoint: Buttercup and Westley make it out only to be captured by the Prince and his sadistic vizier Count Rugen (Christopher Guest). Buttercup makes a deal with the Prince: she’ll return with him in exchange for Westley to be released unharmed. The Prince agrees, but secretly tells Rugan to lock Westley in his torture chamber, the Pit of Despair, instead. Left with Rugan, Westley discovers that he has six fingers—he is Inigo’s father’s killer! (The A and B stories cross.)

Bad Guys Close In: Westley awakes chained to a table and learns he’ll be tortured and killed.

Buttercup is back at the castle, despondent, facing marriage to the Prince. In her nightmares she’s booed for having given up on her true love. She tells the Prince if she has to marry him, she’ll kill herself. He proposes a deal: he’ll send four letters out by ship in search of Westley. But if Westley doesn’t return for her, Buttercup will marry the Prince. Buttercup agrees.

However, we learn his real plan is to start a war with the neighboring country of Guilder by killing Buttercup and framing Guilder for her death. The Prince had been behind Buttercup’s kidnapping all along.

The Prince tells his chief enforcer of the “rumored plot” to kill his bride, ordering that the Forest of Thieves be cleared of all criminals before their wedding day.

As the Brute Squad clears out the forest, Fezzik and Inigo are reunited. Inigo is in a bad way, but Fezzik nurses him back to health and tells Inigo about Rugen. Still bent on revenge, Inigo decides that they need the Man in Black’s help to get into the castle.

All Is Lost: The night before the wedding, Buttercup realizes the Prince never sent the letters. She berates him, and he angrily imprisons Buttercup in her chambers, and tortures Westley with fervor. (Whiff of death!)

Dark Night of the Soul: Inigo and Fezzik follow the cries of anguish through the forest. They find Westley’s body and bring him to a folk healer, Miracle Max (Billy Crystal). Max discovers that Westley is only “mostly dead” due to being sustained by his love for Buttercup, and gives them a cure to revive Westley.

But as they leave, Max tells his wife the cure is not likely to work.

Break into Three: Inigo and Fezzik leave with the still-unconscious Westley and an audacious plan to storm the castle.

Finale: They use Max’s remedy to revive Westley and fill him in on the plan. Unfortunately, he has no strength and can barely hold his head upright, much less stand and fight.

Still they come up with a strategy to play on their assets. And not a moment too soon, because the wedding is already underway. Hearing a disturbance, the Prince hurries through the ceremony.

Once inside, Inigo finally comes face to face with Rugan, who manages to stab him. It appears Inigo came all this way for nothing.

Meanwhile, Westley makes it to the honeymoon suite where he reunites with Buttercup, who is about to commit suicide. Westley assures her that the marriage is invalid because she never said “I do.”

We cut back to Inigo, who isn’t giving up, repeatedly taunting Rugan with his greeting of vengeance: “Hello, my name is Inigo Montoya. You killed my father. Prepare to die.” Rugan tries to bargain, promising whatever he asks for if Inigo won’t kill him. But the only thing Inigo wants is his father back. With that, Inigo kills Rugan and completes his mission.

Final Image: Back in the Grandson’s bedroom, Grandfather offers to skip the happy ending… but Grandson doesn’t mind hearing “the kissing part” anymore. True love has prevailed, and caused a change in perspective.

Grandson asks Grandfather to return the next day and read it again. Grandfather departs with, “As you wish.”