Dr. Strangelove or: How I Learned to Stop Worrying and Love the Bomb Beat Sheet 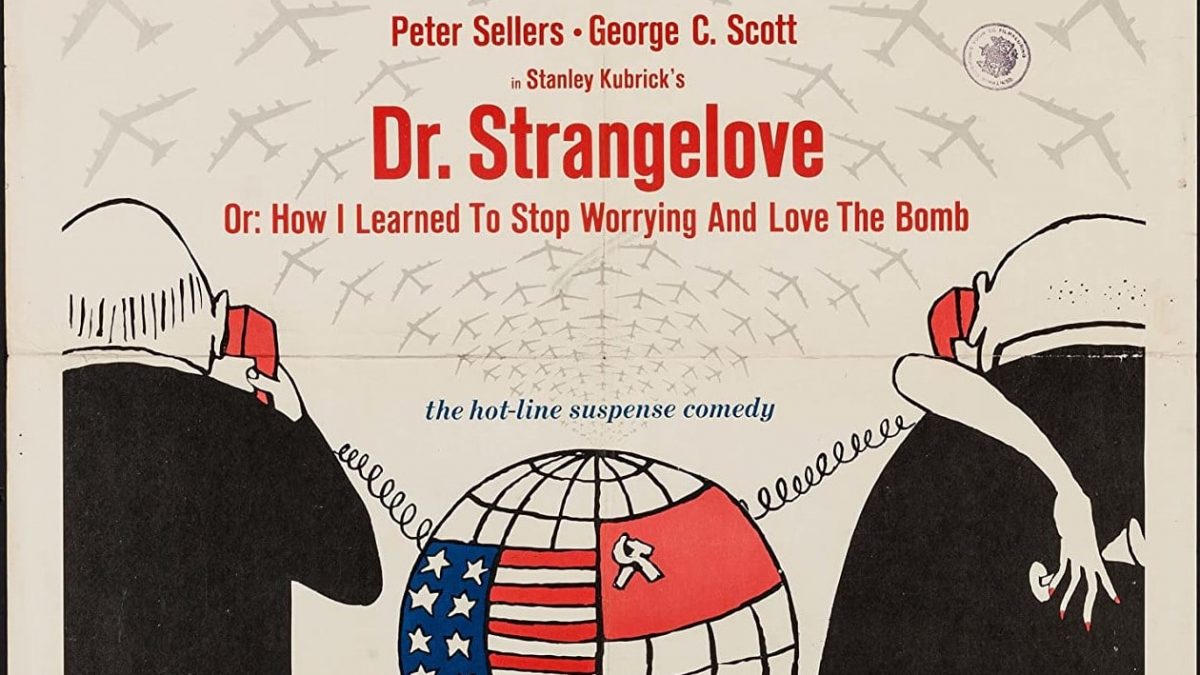 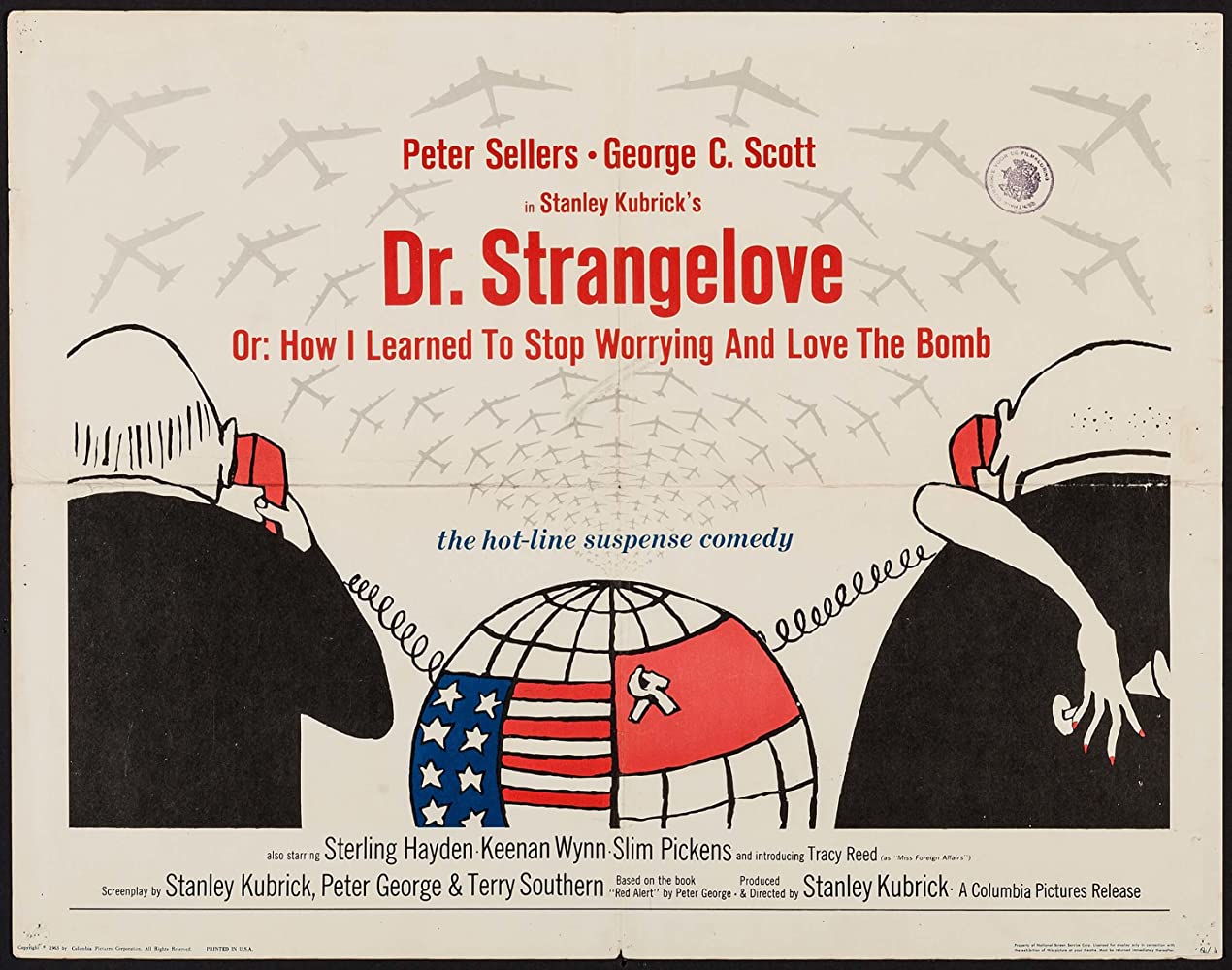 Dr. Strangelove or: How I Learned to Stop Worrying and Love the Bomb was released on January 29, 1964. It was co-written and directed by Stanley Kubrick, who had previously made films including Spartacus, Paths of Glory, The Killing, and Lolita. Kubrick had originally set out to make a tense thriller based on the novel Red Alert by Peter George, but soon realized the absurdity of nuclear war. He brought in Texas satirist Terry Southern (The Magic Christian) to inject absurdist humor into the screenplay.

The film has since become a cult classic at midnight screenings and on home video, and it has gone on to be included in many best comedy lists, including the AFI’s “100 Years…100 Laughs,” taking the #3 spot.  In 1989, the United States Library of Congress included Dr. Strangelove as one of the first 25 films selected for preservation in the National Film Registry

Dr. Strangelove or: How I Learned to Stop Worrying and Love the Bomb falls into the Save the Cat! Institutionalized genre. Hallmarks of the genre include a Group (family, business, or organization), a Choice (a Naif or Brando against the system’s Company Man), and a Sacrifice (join, burn it down, or commit suicide).

How does Dr. Strangelove or: How I Learned to Stop Worrying and Love the Bomb hit Blake Snyder’s story beats? Here is the Save the Cat!® beat sheet for the classic film:

Opening Image: Slowly tracking over dense cloud cover, rocky peaks are visible in the distance. The grave narrator: “For more than a year, ominous rumors have been privately circulating among high-level western leaders, that the Soviet Union had been at work on what was darkly hinted to be the ultimate weapon, a doomsday device. Intelligence sources traced the site of the top secret Russian project to the perpetually fog shrouded wasteland below the arctic peaks of the Zokov islands. What they were building, or why it should be located in a such a remote and desolate place, no one could say.”

Set-Up: At Burpleson Air Force Base, General Jack D. Ripper (Sterling Hayden), a stoic, stogy-smoking officer and head of the Strategic Air Command (SAC) 843rd Bomb Wing, calls his executive officer, Group Captain Lionel Mandrake (our Naif, played by Peter Sellers) of the British Royal Air Force. The Group will be the US military and bureaucracy.

Catalyst: General Ripper, the Company Man, tells Mandrake to place the base on full alert and to issue “Wing Attack Plan R.” They’re going to war and it’s not a drill.

Set-Up/Debate: The Strategic Air Command (SAC) 843rd Bomb Wing are a squadron of B-52 bombers carrying hydrogen bombs that constantly fly within the proximity of Russia to safeguard against a surprise attack. This is the Cold War. One such bomber is commanded by Major T.J. “King” Kong (Slim Pickens). His crew (James Earl Jones among them) receive cryptic instructions from headquarters that a Russian attack occurred. They get their “Wing Attack Plan R” instructions to nuke targets in Russia. The “Battle Hymn of the Republic” plays over the soundtrack.

Though Ripper has ordered all communication to the outside world cut off and had all personal radios confiscated, Mandrake still has his portable transistor radio. He turns it on and discovers music, not news reports of Russian attacks. He takes this up with Ripper.

Theme Stated: Ripper tells Mandrake that in order to preserve our American way of life and to protect our “precious bodily fluids” from a nefarious communist plot (conspiracy theory) of public water fluoridation, that he issued the attack. Ripper is willing to Sacrifice the world for his jingoistic, paranoid ideals. Mandrake realizes Ripper is “as mad as a bloody March hare” but the general locks his executive officer in his office and holds him at gunpoint.

Break into Two: In the Pentagon’s War Room, President Merkin Muffley (Peter Sellers again) and his chiefs of staff, including General Buck Turgidson (George C. Scott), attempt to thwart the insane Ripper’s plan to launch “Wing Attack Plan R.” Ripper’s attack will cause the the Russians to retaliate, resulting in World War Three. The bombers must be stopped. But they need the three-letter recall code on the CRM 114 radios to call off the 34 plans—only 18 minutes from bombing Russian targets (talk about high stakes).

B Story: Group Captain Mandrake is the helper of the story who will attempt to get the recall codes from megalomaniac General Ripper and save the world.

Fun and Games: As Army forces attack Burpleson Air Force base in order to detain General Ripper, President Muffley has Soviet Ambassador Alexei de Sadeski (Peter Bull) brought into the War Room (against Turgidson’s wishes) to see if they can convince Soviet Premiere Dimitri Kissov in Russia on the “hot line” to shoot down the B-52s after they reveal their positions.

Midpoint: Soviet Premiere Dimitri Kissov reveals that a secret Doomsday Device will be activated if Russia is attacked. The Doomsday Device is many buried bombs jacketed with colbolt-thorium G, which would encircle the Earth in a “Doomsday Shroud” for 93 years, killing all plant and animal life. Any attempt to dismantle the device will set it off. Now the stakes raise even higher and the clock ticks.

Bad Guys Close In: Dr. Strangelove (also Peter Sellers), a scientist and former Nazi, claims that a Doomsday Device is a hoax; however, the Soviets mention that they were going to announce it to the world next week. Back in General Ripper’s office, the army has infiltrated the base. He shoots back with a 30-caliber machine gun rambling about “water is the source of all life” and the “fluoridation of children’s ice cream” to Mandrake, tying A and B Stories about sacrifice.

All Is Lost: Realizing that he will be captured and tortured by the army to reveal the recall codes, General Ripper commits suicide without giving the codes to Mandrake—the whiff of death as the world is worse off now than at the beginning of the story.

Dark Night of the Soul: In an effort to undo General Ripper’s plan, President Muffley gives the location of the B-52s so that they can be shot down before delivering their nuclear payloads. The B-52 piloted by Major Kong manages to evade a missile attack, but sustains heavy damage, leaking fuel, and the radio communications are compromised. From General Ripper’s doodles, Mandrake manages to decipher OPE from “Peace on Earth” and “Purity of Essence.” He goes from a Naif to a Brando—making a Choice and a Sacrifice for the great good to not allow the military institution to destroy the world. However, Mandrake’s captured by Colonel Bat Guano (Keenan Wynn).

Break into Three: Mandrake manages to get through with the recall code OPE and the mission is called off, crossing A and B Stories. The world is saved, right?

1. With the Team Gathered, Major Kong’s B-52, flying low to avoid radar and with communications out, is still…
2. … Storming the Castle as his bomber rockets toward the target. They cannot receive the recall code on the CRM 114 radio. The Doomsday Device will go off if they drop their bombs.
3. High Tower Surprise: The B-52 goes to deliver its nuclear payload but the bomb doors were damaged in the Russian missile attack.
4. Dig Deep Down: Major Kong climbs down into the missile compartment to fix the bomb doors so they’ll correctly operate.
5. Executing the New Plan: With target in site and the bomb doors fixed, the hydrogen bomb is deployed with Major Kong riding it to ground zero like a bucking bronco. BOOM!

Back in the War Room, Dr. Strangelove’s former Nazi habits start creeping in with “Heil Hitler” salutes and “Mein Führer” slips as he talks about prominent men living down in mineshafts repopulating the planet with a 10:1 woman to man ratio. However, it’s all for naught as…

Final Image: … the Doomsday Device detonates a series of perfectly timed nuclear eruptions—an ideal bookend of images from the opening tranquility, the popular WWII song by Vera Lynn “We’ll Meet Again” on the soundtrack. Humanity didn’t stand a chance against a megalomaniac like General Jack D. Ripper… well, at least for the next 93 irradiated years on Earth.

The Hitchhiker’s Guide to the Galaxy Novel Beat Sheet