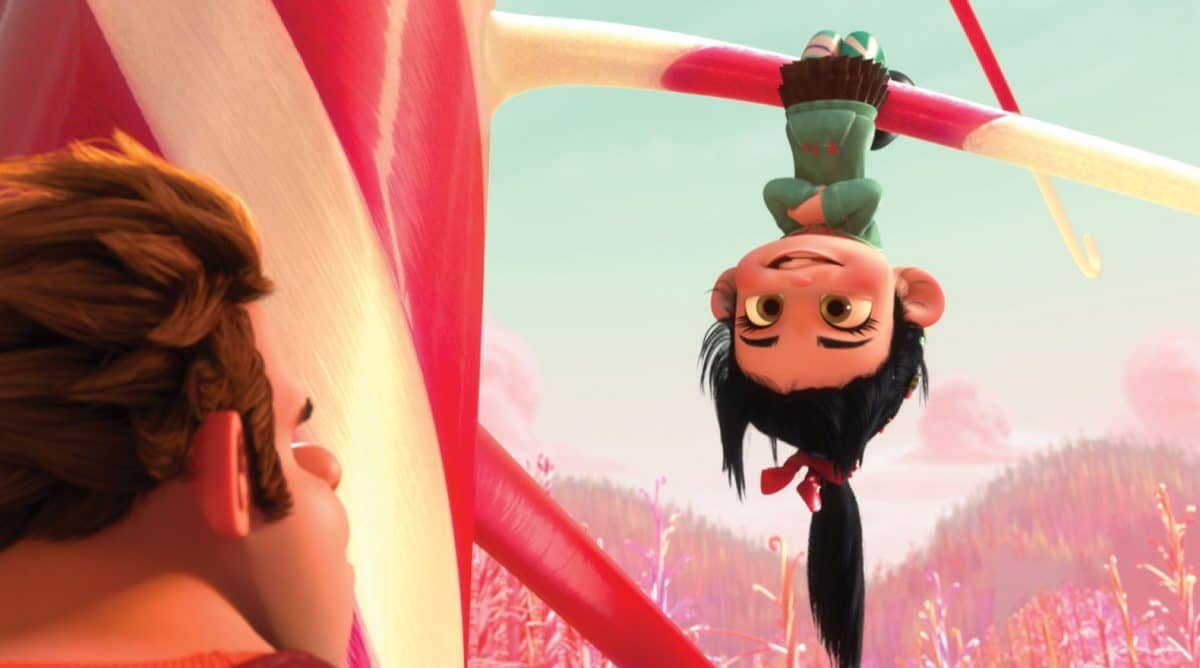 "Are you a hobo?" Vanellope asks Ralph.

Our thanks to Master Cat! Cory Milles for this perceptive blog:

From the early days of hand-drawn cells to its recent offerings of CGI, Disney animated films have always connected with audiences in a powerful way, and with good reason: they never fail to hit the beats. Here is a sampling of some great examples (all artwork ©Disney):

Wreck-It Ralph (2012) — As video game bad guy Ralph sits in a support group, Bad-Anon, he proclaims that he wants to break more than buildings; he wants to smash the stereotype of the role he seems to be stuck in. One of the characters declares that Ralph can’t change the program, implying that we can’t change who we are predestined to be. This is the Theme Stated, and it is what Ralph will debate and discover on his journey.

After bonding with his companion Vanellope and overcoming his badness, he learns that all is not as it seems, and to protect Vanellope, he must act in a way that will destroy their friendship. As he demolishes the car they built together, All Is Lost for Ralph as Vanellope yells at him, telling him that he really is a bad guy deep down. The death of their friendship and the death of Ralph’s character growth is at hand. Later, to save Vanellope, he must sacrifice himself. As he plummets to the ground below, he Digs Down Deep and recites the Bad Guy Affirmation: “I’m bad, and that’s good. I will never be good, and that’s not bad. There’s no one I’d rather be than me.” Ralph has realized that it doesn’t matter who others think he is; he knows deep down.

UP (2009) — The Set-Up is masterfully done in only a few minutes of scenes set to emotional music, introducing the audience to Carl Fredricksen and his wife Ellie. During those brief minutes, we watch as their relationship develops from a childhood friendship to a devoted marriage, sharing in their joys and hardships. As his wife passes, Carl’s motivation is completely clear, helping us understand his actions, making us sympathize with him. We know what he wants, but we also know what he needs. And all in under six minutes.

Carl finally realizes what he needs during his All Is Lost moment. After ridding himself of Russell, the boy who accompanied him on his journey, Carl sits alone in isolation, flipping through the scrapbook his wife left for him. He has what he wants, but only recognizes what he needs as he reads one final note scrawled by Ellie. In his Dark Night of the Soul, Carl understands that he needs to live on, ridding himself of the past that has weighed him down. Brother Bear (2003) — Much of the emotion from Brother Bear stems from the Theme Stated beat, when Kenai is ready to receive his totem in a ceremony. Instead of getting a powerful animal, he is given a totem of a bear that represents love. Angry and humiliated, he vents his aggression by going after a bear that ate their food, intent on killing it. When his brother tries to dissuade him by reminding him of his totem, Kenai lashes out at him, saying, “You really think love has anything to do with being a man?” Kenai will need to learn what it means to love, as well as what it means to be a man.

He learns this in the All Is Lost beat. After being transformed into a bear, a bear cub that has been tagging along with him named Coda eventually tells about the scariest moment in his life, a time when a hunter attacked his mother. Kenai realizes that he was that hunter, and that he had killed Coda’s mother. As Kenai faces his Dark Night of the Soul, he eventually reveals to Coda what he had done, understanding how his rash decision to “act like a man” led to suffering, and the only thing that will fix it is love. After being changed back into human form, Kenai Digs Down Deep and chooses to be turned back into a bear to guide and care for Coda, recognizing that only by showing selfless love can he live by his totem and be a man. Indeed, by becoming a bear Kenai has become a man.

The Opening Image and Final Image are perfect reflections of each other. As fire dances on the cave wall decorated with handprints of those who have come of age, an old man tells a story, the story we have been watching. The final scene adds one detail: Kenai, in bear form, places his paw print on the wall, a perfect representation of his transformation.

Monsters, Inc. (2001) — Sully faces a devastating All Is Lost moment while trying to warn his boss, Mr. Waternoose, that fellow employee Randall has evil plans to kidnap and harm the children they scare to power their city. In a last-ditch effort to stop Randall, Sully reveals that he and Mike Wazowski have been harboring Boo, the little girl that slipped through the door and into their world. But rather than listen to Sully, Waternoose demands that Sully use a dummy to demonstrate to some students his scaring abilities. Reluctantly, Sully does so, unaware that Boo is hiding behind the bed at the moment. As he hears her frightened sobs, he attempts to console her, yet she shies away from him. Looking up at the monitors, Sully stares in sadness at how he appeared to Boo, how he must appear to the countless children he has scared. As he comes to the realization that his world is built on the fear of innocent children, everything around him crumbles. The whiff of death is in the air as his relationship with Boo is destroyed, and it is further compounded as his mentor-turned enemy, Waternoose, banishes him and Mike from their world.

Monsters, Inc. is also memorable because of the way it ends. While it begins with the shadowy image of a horrifying monster opening a door and slinking into a child’s bedroom to create fear, it ends with Sully opening a door to be greeted by Boo’s loving voice saying, “Kitty?” Sully’s smile is the tear-jerking opposite of the beginning, a monster entering a door with love rather than terror, a perfect example of the Opening Image and Final Image in harmony. Tarzan (1999) — Juxtaposition reigns supreme during the Opening Image and the musical number, shifting back and forth between the world of the shipwrecked humans and that of their more primal cousins. During the Set-Up, after a young Tarzan is rejected by the alpha male gorilla, Kerchak, he is comforted by his adoptive mother, Kala. Here, we get a glimpse of the Theme Stated: she admonishes Tarzan to feel his beating heart and realize that it is the same as hers; deep down, they are identical.

This theme is tested when Tarzan meets Jane, causing him to question whether he is more like her or like the gorillas who raised him. He enters the upside-down version of his world, ultimately falling in love with her as he learns what it means to be human.

Later, the balance between his two worlds is rocked when Clayton, the hunter/guide who accompanied Jane and her father, fools Tarzan into revealing the location of the great apes. All Is Lost as Clayton traps Tarzan and goes to find the apes, killing Kerchak. Tarzan must embrace both sides, human and animal. Whereas earlier he had demonstrated his might by killing a jaguar, this time he Digs Down Deep, using his brains as well as his brawn to thwart the human predator in a show of synthesis between the two worlds. The Final Image reveals that Tarzan has found himself in both worlds, the primitive and the civilized.

Another Honor for Al Rodriguez