A Few Thoughts (hopefully helpful) on Writing My Novel

This story has a happy ending, because my book got published. Nice when it works that way.

A year or three ago, besides giving writing seminars and critiquing screenplays from clients who arrived via my fabulous screenwriting book, Your Screenplay Sucks!, I was chair of a new filmmaking program at Belmont University in Nashville. We’d started with 12 students and were up to 60. The University was building an $85 million building, and all of the expensive rooms were for filmmaking. I went to a slew of endless meetings, taught three classes, advised students. So, I was pretty busy. Well, only when I was awake.

So, why a novel? And specifically why a children’s book…? Main reason: I thought it would be easier to sell than a screenplay. It’s all about the Benjamins.

For five years, I’d been a member of the Society of Children’s Book Writers and Illustrators, SCBWI.org, headquartered in Los Angeles. With 22,000 members, it’s the biggest children’s writers group in the world. SCBWI has regional conferences all over the country, and, like a screenwriting conference, they bring in visiting dignitaries and heavy hitters from out of town to teach breakout sessions where you can learn about character and plot and how to get an agent, the usual stuff.

Unlike screenwriting conferences, when you join SCBWI they ask you your ZIP Code and what sort of book you’re writing. Picture book, Middle Grade, Young Adult, etc. They put you in a writer’s group in your area with people writing the same kind of material. I wanted to write a Middle Grade book for boys.

I can’t overstress the importance of the SCBWI writers group. All my SCBWI buddies said their crit group was the reason they stayed in the game, and why their book improved. True for me, too.

The other thing about SCBWI, which is stunningly unique, was, at the end of the conference, the visiting dignitaries give you their email address and tell you that, if you send them your book, they’ll read it. Now that may mean they’d only read 10 pages, but every single person at the front of the room would accept an unsolicited manuscript from an unknown writer. That meant the door to the children’s book world was slightly open, whereas the door to the screenwriting world has always been welded shut.

My first foray into novel writing was born from a weekend stuck in New Orleans. With three days to kill, I dug up an old screenplay about a young boy and pirates that had never gone anywhere. So I thought, “hey, this story already exists….Maybe I can do something with it.” In a furious burst of steam, I cranked out 25,000 words, which was a start. Months later, after I finished a draft, I decided it wouldn’t be different from what was on the market, so I punted it. While working on it, though, I got an idea for a book I thought was different.

First, I wanted to tell a story about an 11-year-old boy from the point of view of his ghastly teacher — tell the whole tale from the bad guy’s POV. As far as I could tell, this had rarely, if ever, been done. It was an interesting exercise and a ton of fun. Eventually I discovered I had to bring Toby Wilcox in, because if we only heard from the villain, we didn’t learn enough about our hero. So, along with Mrs. Ravenbach’s first person narrative, Toby’s diary (written to Willie Mays!) is there, his school journal, minutes of his Submarine Club meetings, and conversations overheard by Mrs. Ravenbach.

That worked pretty well. First hurdle overcome. One remained… a nasty one.

There is only one iron-clad, copper-bound, hot-riveted inviolable children’s book rule: “the hero must be older than the reader.” Children are aspirational: they want to be the person they’re reading about. In The Hunger Games, Katniss is older than the target audience. So too is Harold in Harold and the Purple Crayon.

My problem was that, with Mrs. Ravenbach’s Way, the target audience was me.

Save the Cat!® had a profound effect on Mrs. Ravenbach’s Way. My novel would not have worked, and would probably not have gotten published, had it not been for Blake’s book.

It was weird for the bad guy to tell the story, when the good guy, the one who changes, the one who takes action, the one who wins… is mostly not the one we hear from. The point of view in the novel is basically, “I’m a fantastic teacher. Probably the best in the world. My classroom ran beautifully before this little jerk stepped onto the scene and I am going to fix his little red wagon.” Of course, that voice is my voice. Mrs. Ravenbach is German, and so I had to write everything in the voice of a woman who grew up in Germany.

Once I got the outline done, I was ready to write. But, because I was so busy at school, I literally didn’t have any extra time. So, I grabbed a digital recorder. For inspiration, I taped a picture of the grim female prison camp guard from Lina Wertmuller’s Seven Beauties on my Honda’s dashboard, and, with the outline on the passenger seat, I dictated the book, in Mrs. Ravenbach’s voice, to and from work every day.

I adore voice recognition software. I use Dragon Dictate. It really works. Every day, a few more pages. Finally I had a draft.

All through the writing process, it never occurred to me that I might try to sell this thing. All I wanted to do was see if I could do it. I wanted to massage it and make it as good as I could and then step back, look at it, and think, “I did that. It’s good.” Literally, that was my whole plan.

Partway through, I began to think, “Hmmm. This is turning out pretty well. Maybe I’ll start the get-an-agent derby and see if I can sell this puppy.” I had several years of contacts from SCBWI conferences, so I thought I had a shot.

Then, I got lucky.

I have a friend in New York who knows big-time New York publisher Judith Regan. I fired off an email, told her I was working on a book and would send it when I was finished. She emailed back, “happy to read it when you’re done.” One thing I knew from screenwriting, if someone says they’ll read it, they will only give it one chance. You better send it when it is perfect. Not before. Well, not “perfect.” Nothing is ever perfect. Everything has to be yanked away from the writer at some point.

I don’t give anything I write to anyone “real” until it has gone through my crit machine. My machine includes friends and former students. They read my work, give me notes, and I execute the notes. It is a fairly long list of people so I don’t have to wear each person out reading each draft. Six months into the rewriting process, I emailed Judith to tell her I was not dead, was still working on the book, and would send it at some point. She emailed, “looking forward to reading it. Send it whenever you’re ready.”

Another six months went by. More rewriting. More reading by my friends. Finally, when I was to the point of moving commas around, I got an email from my last reader who said it was finished. I send it to Judith that day.

Three days later, I got an email from Judith saying that she loved it and wanted to buy it. I must say, I’m proud that, after an editor had been assigned, I got very few notes. I had pounded the manuscript so hard that she had only a fourth of a page of suggestions. It took me two days to do the notes and the book was finished.

Please buy it! It’s dark and hilarious. You’ll be able to tell I had a blast writing it. Hope you have fun reading it.

And join SCBWI. It will give you hope, and, after all, that’s what writing’s all about. 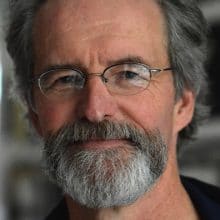 Author of Your Screenplay Sucks! 100 Ways To Make It Great, William M. Akers is a WGA Lifetime Member and has had three feature films produced from his screenplays. He has written for studios, independent producers, and network television. After teaching at Vanderbilt University for 19 years, he created and chairs Belmont University's Motion Pictures department, a Variety Top 40 Film School. His novel, Mrs. Ravenbach's Way, was published in 2016. Akers consults with screenwriting clients around the world, speaks enough French to schmooze his way out of a traffic ticket, and was a Jeopardy! contestant. He didn't win. Visit his Your Screenplay Sucks website.