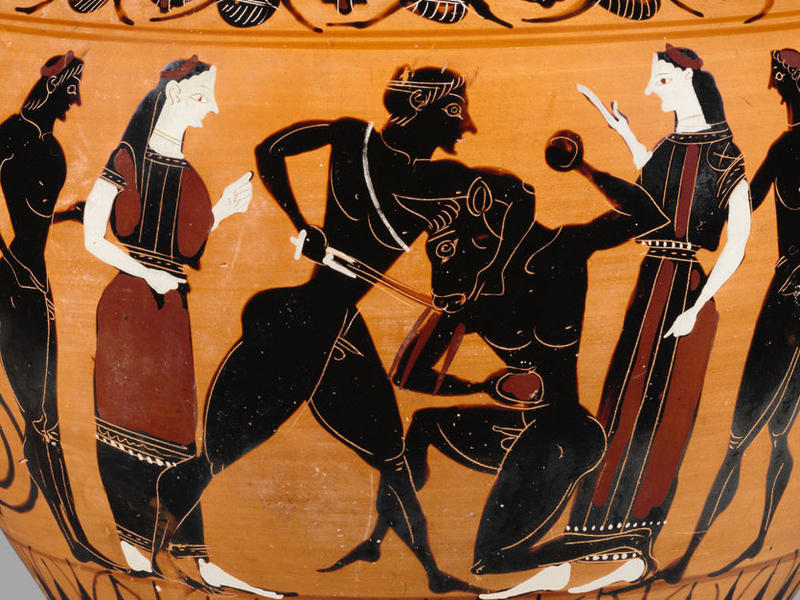 Theseus and the Minotaur

Introduction to the 10-Part Series

Much of the success of Save the Cat! stems from the fact that its principles are based in time-tested techniques, and what could be more time-tested than stories that have been told and retold for… millenia?

As any fan of Joseph Campbell’s The Hero’s Journey knows, myths still give us a strong foundation for crafting our stories. Although many people think that the Hero’s Journey is some kind of universal blueprint for all kinds of stories, we Cats know better: it represents one kind of story among many (hint: Superhero).

Blake Snyder identified 10 genres or story types which make our writing lives easier. With them, you can figure out what kind of story you want to tell very early in your process  and, presto!, you’ll just have to define three basic elements to begin to build the foundation of your tale.

With that in mind, I realized how all of Blake’s genres bear mythical precedents in many cultures. And from those early poetic forms, they have evolved to fit many of the formats we still enjoy today, such as theatre, video games, or film.

For this reason, I thought it would be fun to locate these mythical precedents, and my research soon became something else—a fascinating journey back in time to understand that cultures and stories as different as the Norse myths, African folk tales, Japanese legends, European fairy tales, Grimm’s and Andersen’s stories, and the 1,001 Nights can all be seen through the eyes of Save the Cat!

To keep it simple, I chose the most universal and well-known universe in the Western world and found 10 great stories which easily fit each one of Blake’s genres: Greek myths.

Welcome to this 10-part series!

Minotaur in the Labyrinth

Monster in the House is one of Blake Snyder’s most famous genres, and also one of the easiest to grasp, since it applies mostly to horror movies.

In a MITH, the storyline goes like this: a group of people commit a sin and as a result, they find themselves trapped inside a house and hunted one by one by a monster.

Jaws, The Texas Chain Saw Massacre, Funny Games, and many other films derive from this basic storyline, so successful that dozens of hunted-teenagers-trapped-with-a-monster flicks are done each year since… antiquity?

Many of you (all of you, if you’ve read the above title) will have figured out by now that the “Minotaur in the Labyrinth” story is the basis for all of them. And, of course, this MITH myth respects the three elements necessary for the genre.

In effect, the story began, quite a few centuries back, with a terrible sin committed during the Panathenaic Games (a sports/religious festival): the Athenian team kills Androgeus, son of King Minos of Crete.

As reprisal, King Minos demands that every nine years, seven Athenian young men and women will be sent to his island, where they will be locked in a labyrinth (the house) to be hunted by the Minotaur, a half-bull, half-human monster. As the story goes, a hero called Theseus, son of the Athenian King, trapped in the labyrinth with his teenage friends, kills the monster with the help of Ariadne, Mino’s daughter.

All the elements of a classic MITH are there! If you’re looking for the usually present Half-man, think of Daedalus, designer of the labyrinth and also “he who knows the nature of the beast,” since he helped Pasiphae, Minos’ wife, conceive it—but that’s another story, not suitable for all audiences!

So there you have it: the Minotaur in the Labyrinth is the ages-old precedent of our Monster in the House: the sin, the house, and the monster are all there, in a story so primal it will resonate centuries from now.

Save the Cat!® Goes Mythical: The Road for the Golden Fleece

Take on Me Beat Sheet