Screenplay by: Joel and Ethan Cohen

Based on the novel by Charles Portis (Also, see the 1969 True Grit directed by Henry Hathaway).

Logline:  A young stubborn girl is determined to avenge her father’s death with the help of a drunken, tough-as-nails U.S. Marshall.

2. Theme Stated:
— Stated in a title card over the opening credits. A proverb: “The wicked flee when none pursueth…”

3. Set-Up (1-10):
— Via voice-over, we learn backstory and exposition… — And meet MATTIE ROSS (played by first-time actress, Hailee Steinfeld), a stubborn, precocious girl, whose father was just murdered.
— Mattie rides into town on a train to deal with the aftermath of her father’s sudden death.
— Mattie identifies her father in the coffin.
— Mattie goes to deal with some of her father’s finances. She speaks with a man who sells cattle and tries to get her father’s money back, as he had just purchased cattle before dying. The man refuses. However, after some very convincing banter from Mattie, he finally relents. Mattie gets $325 back.
— There’s a hanging in town. And Mattie talks with the local Sheriff afterwards. She learns that her father’s killer, TOM CHANEY (whom we will meet later), has fled town and is wandering around “Indian country.” Because of this, Chaney’s out of the Sheriff’s jurisdiction and there’s nothing the local law can do. Mattie is not happy with this response.
— So Mattie starts seeking the help of U.S. Marshall ROOSTER COGBURN (Jeff Bridges), who is too busy going to the bathroom in an outhouse to give Mattie the time of day.
— Mattie is staying in town with her Aunt, who runs an Inn.
— Mattie discovers her father’s possessions that he had when he was killed. She misses her father.

4. Catalyst (12):
— Next day, Mattie goes to a courtroom to see Cogburn. Patch over one eye, the smell of liquor on his breath, he’s testifying and we learn a lot of exposition: he’s a U.S. Marshall. He’s killed a lot of people. He’s funny. He’s smart. And he won’t back down from anyone.
— Mattie approaches after his testimony to ask for his help. Cogburn doesn’t give her any time and says no.
— But we know that Mattie doesn’t take “no” for an answer. She will keep trying.

5. Debate (12-25):
— And this starts our debate. Will Cogburn help Mattie avenge her father’s death?
— The next day, Mattie wakes up at the inn, and meets LaBOEUF (played by Matt Damon). He’s a Texas Ranger who’s also after Tom Chaney. We know LaBoeuf wants in on this hunt for Chaney but Mattie tells him she’s already found the guy to do the job.
— Mattie picks up her refunded money from the cattle guy.
— And when she shows Cogburn the actual money, he says he’ll do it. But he wants to do it alone. He refuses to let Mattie come.
— Mattie won’t relent. She uses the rest of the money to buy a horse and get ready for her journey. 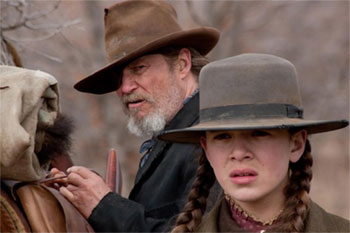 6. Break into Two (25):
— There’s no turning back, when Mattie crosses a river and runs to find Cogburn, who has already left to find her father’s killer. However, Mattie is surprised to find LaBoeuf there as well, and learns that LaBoeuf and Cogburn plan to work together.
— LaBoeuf refuses to let Mattie come. Mattie won’t back down. And finally, Cogburn allows her to join them.

7. B Story (30):
— Our A goal is: find Mattie’s father’s killer. Find Tom Chaney. However, our B goal is the emotional and somewhat patriarchal relationship between Mattie and Cogburn. As the journey continues, we start to see that Cogburn is becoming a father to Mattie. And Mattie fills a void in Cogburn’s life, as he is an estranged father to his children.

8. Fun and Games (30-55):
— Mattie, Cogburn, and LaBoeuf begin their journey to find Tom Chaney.
— However, an argument arises between Cogburn and LaBoeuf, and LaBoeuf becomes upset and rides off alone, determined to find Chaney by himself so he won’t have to split the ransom.
— Mattie and Cogburn ride alone.
— Cogburn finds an Indian home where Chaney might be hiding. However, they don’t find him there. Instead, they find a gold coin that was carried by Mattie’s father and realize that they’re on the right track.
— Mattie and Cogburn continue on their way. Cogburn talks about his past. He’s been married multiple times. His kids don’t talk with him. And he’s become this grumpy old man who likes to drink.
— Mattie and Cogburn stumble upon a man hanging from a tree. They cut him down thinking its Chaney, but it’s not. At that moment, they hear a gun shot and are surprised to meet an Indian Medicine Man who wears a bear head over his face. This man is not a threat to them and they ask him where they can find shelter for the night. The Indian Medicine Man tells them of the closest camp.
— Nighttime: Mattie and Cogburn find the camp. But the men inside the cabin have guns and start shooting. Cogburn fights back and ends up wounding one of the men in the cabin.
— The men finally allow Mattie and Cogburn to come inside the cabin. They talk. These men seem to know a lot about Chaney and personally know of his men. These men become aggressive with Cogburn and Mattie and another fight breaks out. One man is shot. The other is stabbed. And Mattie and Cogburn still don’t know where Chaney is…
— However, they do see that a group of men are heading towards the camp.
— They hide behind the cabin and watch… and are surprised to see LaBoeuf, held captive by some of Chaney’s men. They are going to kill LaBoeuf and rob the cabin, when Cogburn opens fire. He has a quick shot and picks off most of the men, saving LaBoeuf’s life.
— One man escapes. We still don’t know if that was Chaney.
— LaBoeuf is happy to be alive but also angry that he’s been injured by Cogburn’s shot.
— That night over the campfire, Cogburn starts to drink. We know he’s a drunk but this is the first time that he starts indulging on the journey.
— Cogburn says that there’s a cave further into the Indian Territory and he’s certain that Chaney is hiding there.
— Mattie, LaBoeuf, and Cogburn ride to the cave.
— Chaney is not in the cave. No one is in the cave. And our heroes start to have doubts. They’ve looked for days now and can’t seem to find Chaney. Where is Chaney? Will they ever find him? These questions looming, Cogburn and LaBoeuf start to fight.

9. Midpoint (55):
— The False Defeat comes at this moment. It’s night and Mattie, LaBoeuf, and Cogburn rest. However, Cogburn continues to drink heavily and criticize LaBoeuf for misleading them to the cave. LaBoeuf takes offense and says this whole journey is pointless. The trip is over. LaBoeuf leaves.
— However, Mattie refuses to give up and takes care of the drunk Cogburn that night as though he were her father.

10. Bad Guys Close In (55-75):
— Early the next morning, Mattie walks to the river to gather water and it is there… that she sees Tom Chaney (Josh Brolin).
— Mattie is prepared. Mattie has a gun. And Mattie shoots Chaney, but he is not hurt badly. Chaney grabs her, and takes her to the other side of the river. Chaney has two other men with him… and these men know of Cogburn the U.S. Marshal. In fact, this is the perfect opportunity to go kill Cogburn. So Chaney’s two men head out to find Cogburn, while Chaney stays back with Mattie. 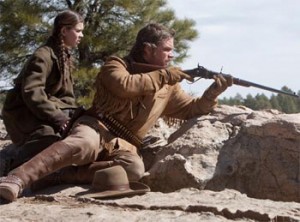 11. All Is Lost (75):
— Mattie, held hostage by Chaney…
— Mattie is separated from her patriarchal figure, Cogburn.
— And it looks like Cogburn is going to be killed by Chaney’s men.
— And right when Chaney is going to kill Mattie…
— LaBoeuf comes to the rescue. He had wandered off the night before, basically quitting the mission; however, now he’s returned and redeems himself.
— LaBoeuf knocks Chaney off Mattie.
— LaBoeuf must now help Cogburn, who is being attacked by Chaney’s men. LaBoeuf takes aim and is able to pick off Chaney’s men. But in the process, Cogburn is injured.
— Just then, we see that Chaney’s still alive.
— He comes after Mattie…
— And Mattie shoots Chaney with the gun…
— However, the force of the gun… kicks Mattie back down… into a cave…

12. Dark Night of the Soul (75-85):
— Mattie is in a dark cave. And worse yet, snakes surround her…
— A venomous snake bites Mattie…
— Luckily, Cogburn scaled down into the cave to rescue her.
— Cogburn sucks the venom out of Mattie’s wound.
— But Cogburn knows that Mattie needs medical attention. They must ride back to the village. They take Mattie’s horse and promise to send for him when they get to the village.

13. Break into Three (85):
— Mattie and Cogburn race back to get medical attention for Mattie’s venomous bite.
— Mattie’s hallucinating.
— Cogburn is exhausted and can barely stay awake.
— Mattie is reliving experiences that she’s had with her father while hallucinating.
— Her horse is nearly lame from fatigue.
— And ultimately, the horse gives up.
— Cogburn takes Mattie in his arms and walks her to the closest house.
DISSOLVE:

14. Finale (85-110):
— Years later.
— Mattie is now a grown woman.
— She hasn’t seen Cogburn since that night.
— We see that she’s lost her arm from the venom; however, she’s otherwise a healthy woman.
— Mattie has received word from Cogburn. He’s retired as a Marshall and has joined a Wild Wild West Show. Mattie goes to see him. However, Cogburn has just recently passed away.

The Kids Are All Right

How to Train Your Dragon

Next week’s blog: “The Beats Go On” by Anne Lower

The Beats Go On

From the Best of Blake's Blogs: For the Love of Writing -- And Writing of Love