Our thanks to Master Cat Ben Frahm for this breakdown of Woody Allen’s brilliant romantic comedy.

Written and Directed by: Woody Allen

2. Theme Stated (5):
— While walking around the Palace of Versailles, Paul tells our hero, Gil: “Nostalgia is the denial of the painful present.” People that want to live in the past are merely avoiding the present and the now.

3. Set-Up (1-10):
— Gil is a screenwriter who lives in Malibu. He is not satisfied by his job of rewriting big studio films.
— Gil is going to marry a woman who is not right for him. Her name is Inez.
— Gil and Inez are in Paris, and are soon to be married.
— Gil has fantasies of living in Paris and aspiring to be a novelist.
— Gil is writing a novel about a guy who works in a “nostalgia shop.”
— Inez’s parents are also in Paris on business and don’t seem to care much for her future husband.
— Inez runs into an old professor of hers. He is Paul. Paul is a pompous man who knows everything about everything. We fear that Inez might have feelings for Paul.

4. Catalyst (12):
— Inez and Paul go dancing one night. Gil doesn’t feel like going. And instead, chooses to walk the streets of Paris and think about his writing.
— Gil gets lost.
— The clock strikes midnight in Paris.
— Gil is approached by an old horse-drawn cart that offers him a ride. He thinks nothing of it.
— The cart takes Gil to a party.
— At this party, Gil meets F. Scott Fitzgerald? And his girlfriend, Zelda?
— After the party, Gil follows friends to a bar where he meets Hemingway? This can’t be happening!
— Gil also meets Gertrude Stein, who is Hemingway’s reader.
— Gil realizes that somehow, he has transported back to the 1920s, and is amongst some of the greatest writers of all time who used to gather there.

5. Debate (12-25):
— The next day, Gil can’t make sense of this.
— Did it really happen?
— Gil tries to explain this to his fiancée, Inez. She immediately thinks he’s crazy.
— Gil must go back. That night he tries to recreate the same event; it doesn’t work.
— That is, until the clock strikes midnight again.

6. Break into Two (25):
— Gil chooses to go back in time again, and is transported back to the 1920s.
— Gil finds himself at Gertrude Stein’s house.
— Gil talks about writing and life and love with Hemingway and Gertrude Stein.
— Gertrude Stein agrees to read Gil’s book about the “nostalgia shop.”

7. B Story (30):
— And upon turning, Gil meets Adriana, who is a beautiful woman. Gil is immediately smitten by her, but Adriana is being pursued by Hemingway. However, she’s dating Picasso and their relationship is rocky, at best. 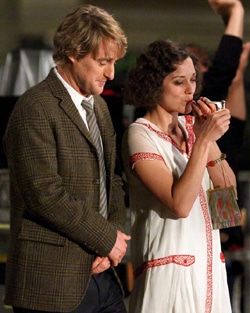 8. Fun and Games (30-55):
— Gil wakes up back in the present.
— He is bored by Paul and his condescending ways.
— And Gil, already changing from his journey, uses his knowledge of the past to correct the condescending Paul and makes him look foolish at a museum. Gil is becoming more confident per his experiences.
— Gil can’t stop thinking about the past. And stumbles upon an antique store, where he meets a captivating Antique Dealer. Gil talks about Cole Porter with her. They share an instant connection.
— Gil longs for the 1920s, Paris, and that night sneaks out for another “walk.”
— Gil goes dancing with Adriana at a carnival.
— Gil goes for a walk with Adriana. They talk about love and relationships.
— And at the riverfront, they see Zelda Fitzgerald trying to kill herself. She is distraught over her relationship. They save Zelda.
— And in doing so, Gil slips that he’s soon to be married to a woman that he doesn’t love. Adriana hears this and becomes defensive.
— Gil starts to realize he’s falling in love with Adriana.

9. Midpoint (55):
— Gil meets Dali and some of his surrealist friends at a restaurant. Gil has to tell someone about his feelings and what is happening. So he tells Dali that he’s falling for a woman from a different time. Dali and his friends have heard crazier things and urge him to pursue the girl.

10. Bad Guys Close In (55-75):
— In the present, Inez’s father has become suspicious of Gil disappearing every night. So the father hires a Private Detective to follow Gil – convinced that he’s having an affair.
— That night, Gil returns to the ‘20s, and finds out that Adriana broke up with Picasso. And, being a free spirit, she has already left for an African Safari with Hemingway.
— Gil also runs into Gertrude Stein and she says that she didn’t love his book. It wasn’t optimistic enough about the present and the “human condition.”
— Gil is distraught. His pursuit of being a novelist feels threatened — as well as his pursuit of following true love in Adriana.
— The next day, present, Gil walks alone. He finds the Beautiful Antique Dealer that we met earlier, and they talk about the past and music.
— Gil finds a book vendor who sells old and rare texts. And leafing through these periodicals, he finds a journal that belongs to Adriana (from the past).
— Gil reads Adriana’s journal and learns that she’s met a man from Malibu. His name is Gil. And she has feelings for him. She even had a dream about Gil where he gave her earrings.
— Gil has an idea. He can use this new information “from the past” to woo Adriana, when he returns to the ‘20s later that night.
— So what does Gil do? – He runs back to the hotel room and steals a pair of Inez’s earrings that he will wrap up and present to Adriana.
— Inez unexpectedly shows up with her parents. Her father is having heart problems. And in the midst of this chaos, Inez learns that her earrings are gone. Someone stole them. Inez becomes accusatory. Gil makes up lies. And finally gets out of it. Gil sneaks back to the 1920s.
— Gil goes to find Adriana. He professes his love to her.
— They kiss. And they are in love.
— A carriage appears and Gil urges Adriana to get in, wanting to experience the “magic of travel” with her.
— Gil and Adriana are transported back to the late 1800s.
— Adrianna is captivated. Not only by Gil, but also about traveling to the past. Adriana loves it here. It’s so romantic.

11. All Is Lost (75):
— Adriana is so in love with the past that she doesn’t want to go back to the ‘20s. She wants to stay.
— And this creates the conflict that ultimately ends their relationship.

12. Dark Night of the Soul (75-85):
— Adriana is such a nostalgic character, floating through life, a beautiful, yet lost soul, that when she transported back to the late 1800s, she knew she never wanted to return to her current life.
— Gil knows that he doesn’t want this. He has learned that he wants to live in the present.
— And this difference of nostalgia vs. the view of the present, the here and now, is what ultimately creates a schism in his relationship with Adriana.
— Gil must make a decision.
— Gil feels alone.
— Gil feels like he’s lost the love of his life.
— What is Gil going to do? Stay with Adriana in the past, or return to his life and try to fix it…

13. Break into Three (85):
— Gil chooses to return to his life in the present.
— Gil leaves Adriana behind, but we know that she is happy now.
— Gil says good-bye to his friends from the 1920s.
— Gil sees Gertrude Stein and learns that she likes the rewrite of his novel. Gil realizes that he has what it takes to be a novelist.

14. Finale (85-110):
— Gil returns to his present life and confronts Inez. She confesses to an affair with Paul.
— Gil tells her that they are no longer getting married.
— Inez flips out. Her father flips out. And says that he hired a Private Detective, and is sure that Gil had an affair.
— CUT TO: We see the Private Detective is stuck in the Middle Ages and will not return.

15. Final Image (110):
— Gil is walking the streets of Paris alone. He comes upon the Beautiful Antique Dealer. They continue their conversation about music and art and literature. And we learn that Gil has decided to stay in Paris and become a novelist. We have hints that he might even start a future with the Antique Dealer.
— (And we see that this final image is the exact opposite of the opening, where Gil was walking with a woman, Inez, who wasn’t right for him. Gil now walks with the Antique Dealer. And they look happy together…)

A Cat! and Her Batman Fan Film