Our thanks to Master Cat! Alvaro Rodriguez for this beat sheet.

The survival story is one of the oldest: man against nature. In Joe Carnahan’s The Grey (screenplay by Carnahan and Ian Mackenzie Jeffers, based on a story by Jeffers), Liam Neeson is Ottway, a man at the end of the world and at the end of his rope, with little to live for as he keeps watch over a crew of oilfield workers in the frozen tundra.

On its face, it is a classic Monster in the House story: the monsters are the grey wolves that surround Ottway and his stranded compatriots in the snow; the house is the forbidding, icy terrain; and the sin is that they have crossed the line into territory they can neither understand nor truly inhabit. But like the best survival tales, The Grey is a brooding existentialist fable about the will to live and fight, to stand for something in the face of adversity even if it means dying or choosing the hour of one’s death.

Opening Image: A wintry landscape frozen in mist is juxtaposed against the man-made fires of a refinery — this is the crossing of two worlds, nature and man. The howling of wolves cues us in to the danger that awaits.

Theme: “I’ve stopped doing this world any good,” the suicidal Ottway narrates, even as he shoots and kills a stalking wolf who comes bounding out of the wild to attack men working on a pipeline. Ottway will face the challenge to find something worth living for in The Grey.

Set-Up: Separated from his wife by some unspoken transgression, Ottway retreats to the fringes of society surrounded by outcasts, “ex-cons, fugitives, men unfit for mankind.” On one lonely night, he pens a suicide note of sorts as he contemplates ending it all but spots a lone wolf on the attack and kills it, sparing himself for now.

Ottway boards a plane with the other crew members including the talkative Flannery, the peacemaker Hendrick, the macho Diaz, and the introspective Talget.

Catalyst: After tense moments of turbulence on the flight, the plane crashes, killing most of the men. 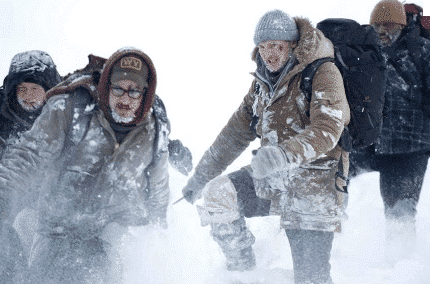 Debate: Ottway comes to on the icy ground and surveys the wreckage. The few other survivors are in shock. Ottway discovers one man still alive but hopelessly wounded, and Ottway talks him into not fighting the death that waits at his door. The others watch as Ottway guides him into oblivion by getting him to focus on someone he loves letting him go.

There are seven survivors. Ottway takes the lead, formulating a plan: We have to build a fire, make a shelter, protect ourselves from the elements and whatever else is out there. Though there is some dissent, the men begin scavenging the wreckage for anything useful. Hendrick wants to bury the bodies, but there’s no time.

Break into Two: Ottway thinks the stewardess survived but closer inspection reveals the motion from her body was coming from a wolf eating at her cold flesh. Ottway jumps into the fray and the wolf shifts its attack on him. The others come to his rescue, beating the wolf away.

B Story: Throughout the story, Ottway has flashbacks of lying in bed with his wife, or reminiscences of his father. They represent the past he has left behind, a golden-hued Eden from which he has been exiled. Though she will say to him, “Don’t be afraid,” he only laments that his flaws have separated him from everything he has loved.

Fun and Games: Ottway tells the others that the wolves may be passing through and a temporary threat, unless they have crashed within a certain radius of the wolves’ den. They gather up the wallets of the dead to provide identification for the families, but Diaz takes the money from the oil company rep’s wallet. Ottway tells him to put it back. Diaz takes the man’s GPS-enabled watch which emits a signal.

As night falls, they huddle around a campfire, drinking the little bottles of alcohol that survived the crash and returning to brief sense of normalcy until they realize they are surrounded by wolves, their eyes glowing just outside the range of the campfire. After a tense standoff, the wolves retreat. Ottway says they will keep watch in two-hour shifts.

During the night, one of the men rises to relieve himself and is attacked and mauled by wolves so silently that the others do not wake up.

The body is discovered by daylight, along with the realization that the wolves are not attacking for food, but to kill. Ottway tells them their best chance is to trek to the distant treeline and get out of the open. Diaz is the loudest dissenting voice but assents to go along while offering no help. Hendrick says some last words over the bodies of the dead before they depart.

They trudge through the snow into the unknown, surrounded by flurries that white out everything around them. Wolves bring Flannery down in a brutal attack and though the men try, they cannot save him.

As dusk falls, they see the treeline in the distance and hurry to outpace the wolves and build a fire to make a stand against them. Ottway has scavenged a box of shotgun shells and shows the men how to sharpen tree branches and tape the shell at the end — a “bang stick” — that can be used as a weapon. Diaz deflates their meager attempts, but Ottway confronts his macho swagger, telling him it’s okay to be scared. Diaz reacts with anger and the two wrestle crazily until the presence of a wolf pulls them back to the immediate danger they’re in. The wolf attacks but they kill it, Diaz repeatedly stabbing it with everything he has.

Midpoint: They cook and eat the wolf and preen before its hiding, watching companions. In a fit of revenge, Diaz severs the dead wolf’s head from its body and flings it into the darkness at the other wolves waiting in the wings, a declaration of war answered by a rising siren of howls.

Bad Guys Close In: As they move deeper into the woods, Storm clouds build in the distance. If they lose their fire, they will freeze. In the blizzard, another of the team dies from asthma and exposure.

The storm passes. Ottway re-reads his last note to his wife, but it seems to have been written by a different man.

Ottway spots a tree stump with signs that there is logging here, a clue they might be near help or an escape route. They hear sounds of a river nearby and trod on to the edge of a massive cliff. They jury-rig a line a towering pine on the other side to cross the drop.

Talget, the last man to cross, looks down and loses his glasses as the line breaks and he plummets crazily into the branches of the tree, falling to his death.

All Is Lost: Before the others can climb down and reach him, Talget is mauled by wolves. Diaz is injured as he comes down and the wolves give a howl of victory.

Dark Night of the Soul: Now there are three: Ottway, Diaz, and Hendrick. They reach the river, but Diaz is too weak to go any further. Hendrick offers to build a litter to carry Diaz between them, but Diaz has made his peace and his choice. Last goodbyes are said and Diaz is left to die and survey the quiet natural beauty of the landscape.

As Hendrik and Ottway continue, Hendrick reveals that he watched Ottway that last night at the base camp when Ottway was going to kill himself.

Finale: Ottway alone. He curses Heaven: “Say something! Do something! Show me something!” With no reply he realizes he must go it alone. There is no path, no guide, just his will.

As he takes a dream-like final steps, he removes photos from each of the dead men’s wallets — wives, girlfriends, children — remembering them, and in some way, representing all men. One last time, he reads his suicide note as the wolves circle him and he realizes he is surrounded by old bones. This is the place of death.

The wolves part to let the Alpha Male, much larger than the others, have Ottway.

In one last reminiscence, Ottway reveals his wife didn’t leave him, but died of some illness, for which he blames himself.

He chooses not to surrender to death but to make a final stand.

Final Image: Ottway, small bottles of alcohol from the plane taped to his fists and then shattered, squares off with the Alpha Male. As Ottway’s changed, almost animalistic eyes fill the frame, the story comes full circle to the immortal, brutal battle between man and beast.

Mike and Ira Save the Cat