Take on Me Beat Sheet 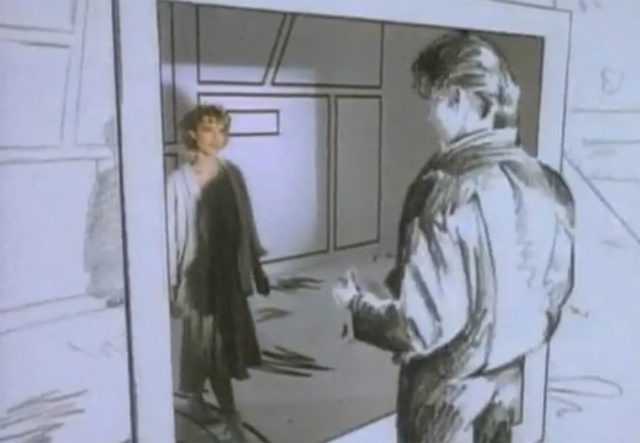 In the 34 years since its release, the a-ha video is more popular than ever with nearly a billion views on YouTube. An MTV favorite back in the day as well as an 80’s staple song, “Take on Me” was the first synth-pop single of the new wave group a-ha from their smash album, Hunting High and Low. “Take On Me” was their first video and most significant success, especially in the United States.

The unique pencil-sketch-comes-alive video (created by a rotoscoping technique) was directed by Steve Barron and nominated for eight awards (winning six) at the 1986 MTV Video Music Awards. Its unique visual style was duplicated by other video directors for decades, including a remake by Weezer starring Finn Wolfhard (Stranger Things, IT) and his band, Calpurnia. It also appeared in Steven Spielberg’s Ready Player One.

This 3:47-minute video best falls under the genre Buddy Love where you have an Incomplete Hero meet their Counterpart (typically at the Catalyst), and they must rise above a challenging situation, the Complication.

Can a Buddy Love story hit all the beats in three minutes? Come along for the ride.

Cousins: Dirty Dancing, Romeo & Juliet, Beauty and the Beast, Benny & Joon, Let The Right One In, The Graduate

How does A-ha’s Take On Me hit Blake Snyder’s story beats? Here is the Save the Cat!® beat sheet for the music video:

Opening Image: We begin with quick and random pencil sketches of a riveting motorcycle race that’s about to start. And they’re off!

Set-Up: A lonely girl (Bunty Bailey) in a coffee shop reads comic book panels of the illustrated race in progress. A stout waitress pours her some coffee and writes the girl up a bill.

Theme Stated: It’s evident from the visuals this girl is bored and lonely. The song on the soundtrack, “Take On Me,” is a desperate plea for love. “We’re talking away / I don’t know what / I’m to say I’ll say it anyway / Today’s another day to find you / Shying away / I’ll be coming for your love, okay?”

Set-Up (cont’d): The girl turns the pages, narrowing her focus on a dreamy guy within the story.

Catalyst: The dreamy guy (Morten Harket) in the comic book winks at her.

Debate: What? Did that happen? She wonders. Then an illustrated hand reaches out of the comic book. Does she believe this is happening? Can this be real? No one else in the coffee shop seems to notice. Does she take the offered hand? “Take on me (take on me) / Take me on (take on me) / I’ll be gone / In a day or two.”

Break into Two: The lonely girl decides to take dreamy guy’s hand, and she steps into his comic book world.

B Story: The dreamy guy also needs love and understanding. Life in his comic book world is empty. Together, they’ll complete one another and end their loneliness.

Fun and Games: She’s in the comic book realm, and they’re getting to know each other (the promise of the premise). “So needless to say / I’m odds and ends / But I’ll be stumbling away / Slowly learning that life is okay / Say after me / It’s no better to be safe than sorry.”

Bad Guys Close In: Angry that she got stiffed for the tab, the waitress back in the diner wads up the comic book at the empty booth and throws it in the trash. In the comic realm, two motorcycle racers (appropriately with the number 13 on their helmets) attack the girl and guy with a pipe wrench. The assailants chase them through the confusing maze of comic book panels. Stakes raise and the clock ticks. “Oh, things that you say / Is it a life or just to play my worries away? / You’re all the things I’ve got to remember / You’re shying away / I’ll be coming for you anyway.”

All Is Lost: Girl and guy are trapped against a wall. No place to go. The whiff of death!

Dark Night of the Soul: The dreamy guy builds a portal and chucks girl out (the assailants seem to want her). She arrives back in the diner, much to the surprise of the customers (going public). She understands this was more than just a fantasy. “Take on me (take on me) / Take me on (take on me) / I’ll be gone / In a day.”

Break into Three: Grabbing the crumpled-up comic book, the girl rushes back to her apartment. She needs to find out what happened to her dreamy guy between the panels. A and B Stories cross.

Final Image: The girl is now complete, and so is he. They’ve bridged the worlds between fantasy and reality. A comic-book romance turned real—a true-love transformation in three minutes.

About the Beats, Success Stories, Tools