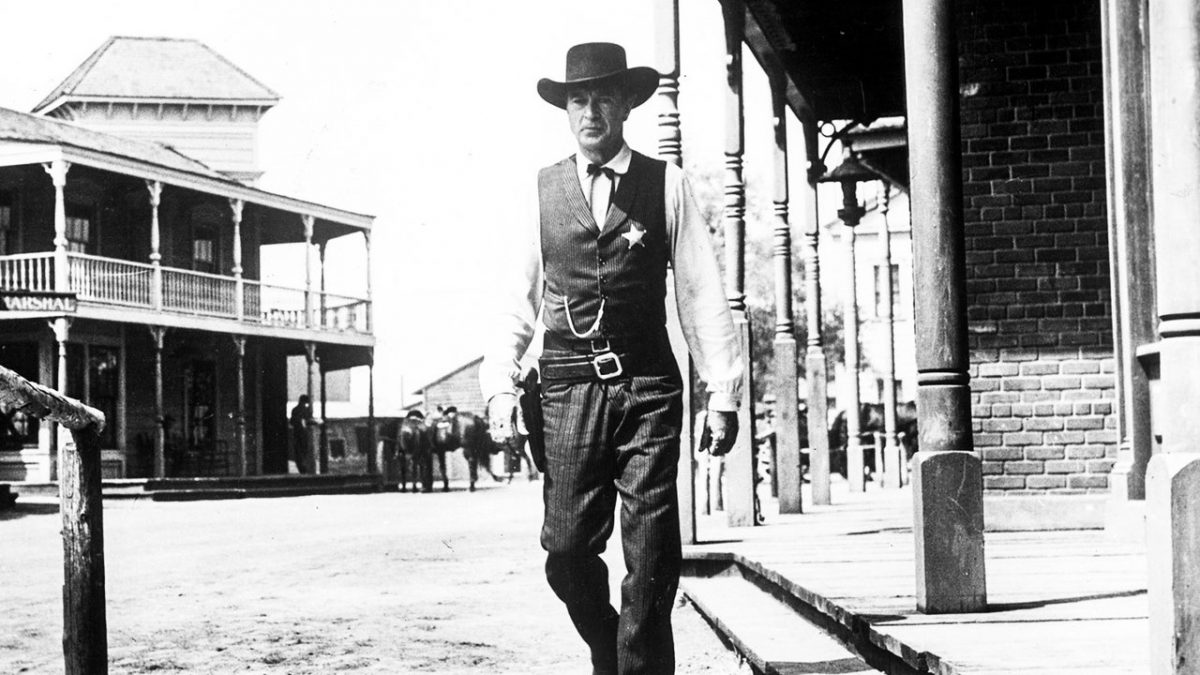 Genre: Superhero, with its 3 elements: special power, nemesis, and curse

How does High Noon hit Blake Snyder’s story beats? Here is the Save the Cat!® beat sheet for the classic film:

High Noon was a departure from the common Western, featuring little action and a hero who spends most of the movie afraid—not to mention a town full of people unwilling to defend themselves.

So how is this a Superhero tale? The hero, ex-Marshal Will Kane, has the special power of honor. He’s compelled to do what he believes is right, regardless of the danger or sacrifice.

Kane’s nemesis is a man he put away for murder, Frank Miller, who has returned to seek revenge in his own twisted version of a code of conduct.

And the curse in this case is simply that of a principled man surrounded by cowards. It sets him apart, prevents him from being part of the group, and even gets in the way of his relationships.

Theme Stated: The theme is conveyed throughout the movie via the song, “High Noon,” which features lyrics including: “I do not know what fate awaits me, I only know I must be brave. And I must face a man who hates me, or lie a coward … in my grave,” and “Oh, to be torn ‘tweenst love and duty…”

These are actually the only words we hear in the first 4 minutes of the movie, and help create context for the story we’re about to see play out.

Set-Up: We’re in the small town of Hadleyville, and it’s Marshal Will Kane’s (Gary Cooper) wedding day. His bride, Amy (Grace Kelly), is a Quaker, and Will is leaving to live a non-violent life with her. The new Marshal won’t arrive until the next day.

Catalyst: But the festivities are interrupted when Kane receives word that Frank Miller (Ian MacDonald) has been released from prison. It’s his gang that’s been spotted in town (the three men from the Opening Image), asking about the noon train. They must be waiting for Frank’s arrival.

Though we don’t know all the details yet, the general reaction to this news is that Kane should get out of town. He’s already turned in his badge; this isn’t his job anymore.

Debate: They’re packed and ready to leave, so Kane and Amy hurry to do so before the looming noon deadline. But before they’ve made it very far, Kane’s sense of duty and honor get the best of him. He tells her, “They’re making me run. I’ve never run from anybody before.” He turns the wagon around and heads back to town.

Amy continues to try to convince him to leave, but Kane argues the solution would only be temporary since Miller and his gang would surely come for them wherever they go. Kane sent Miller away for murder, and he clearly wants revenge. Amy gives Kane an ultimatum: She is leaving on the noon train, with or without him.

The town judge, who sentenced Miller, flees on horseback and urges Kane to do the same, saying “Nothing that happens here is really important.” This speaks again to the nature of honor, which must be applied with an even hand.

Break into Two: Kane intends to stay and face Frank Miller, and puts the word out to round up his deputies.

B Story: Kane asks young deputy Harvey (Lloyd Bridges) to join him in facing Miller, but Harvey is bitter that Kane did not recommend him to take over as Marshal. Harvey tells Kane he’ll stand with him if Kane puts a word in for Harvey to get the job. Kane, ever honorable, rejects the offer, so Harvey quits.

Harvey’s struggle with honor and duty offers a thematic complement to the A Story. Later, we see Harvey’s girl, Helen Ramirez (Katy Jurado) (who, before Harvey, was romantically involved with Kane), challenge Harvey further when she compares him to Kane, calls out his behavior, and then tells Harvey he’s not yet a man and may never be.

Fun and Games: Kane tries to gather a posse to stand with him as he faces Miller, but is met with fear, hostility, and a lot of excuses. One man, Herb, agrees to be deputized but many others tell Kane he should simply leave town and let the next Marshal deal with it. Another, Jimmy, offers to help, but he’s vision impaired, drunk, and likely to get himself killed, so Kane sends him home.

Midpoint: Still looking for allies, Kane goes to the church where a service is in progress. When Kane asks for help, a few men jump up to volunteer but they’re stopped by other members of the group who say they should figure out what’s really going on before committing to it.

Bad Guys Close In: As the conversation continues, Kane’s chances of getting help dwindle. Some think the town will get a bad reputation if there’s fighting in the street, others think they’ve already done their duty by paying taxes for the Marshal and his deputies—they shouldn’t have to fight as well. Kane leaves without a single volunteer.

All Is Lost: Finally Kane goes to his lifelong friend and predecessor, Martin Howe (Lon Chaney Jr.). But even he, a man who’s been a lawman his entire life, refuses Kane’s request. Martin tells Kane there’s no point to fighting, and deep down, people just don’t care.

Dark Night of the Soul: Harvey’s drinking in the bar and the bartender comments on his lack of guts. Soon after, Harvey spots Kane walking through town alone and goes to the stable to confront him. There, Harvey sees Kane pondering one of the horses and correctly guesses that Kane is thinking about running. Harvey wants Kane to leave, ostensibly to make himself look like less of a coward in comparison. But it was just a momentary wobble, and Kane insists he’s staying. Harvey physically pushes Kane to go and a fight breaks out. Kane actually fights to stay, so he can do the right thing.

Meanwhile, Amy has confronted Helen Ramirez to find out if she might be the reason Kane insists on staying, but Helen sets her straight. And she tells Amy that if Kane were her man, she would stay and fight with him.

Break into Three: Kane goes to the barbershop to get cleaned up, a brief moment of reprieve before he must resume his fight. Somewhere off-screen, a man builds coffins to prepare for the inevitable.

Finale: Miller’s gang prepares for his arrival. Back at Kane’s office, Herb learns he’s the only volunteer and backs out in fear. A final offer to help comes from a 14-year-old boy; Kane admires his courage but can’t in good conscience accept it. He’s going to have to do this alone.

The whole town waits, safely hidden away, as the clock ticks toward noon. Amy and Helen leave for the train station together, locking eyes with Kane on the way out.

Miller and his gang move in, heading for the showdown. The shootout begins, weaving about the town’s main street. Hearing the gunfire, Amy has a change of heart. She runs off the train and heads back to town.

When Kane takes cover in a stable building, Miller’s gang sets fire to it. Kane frees the horses and escapes with them.

Amy sees what’s going on and takes the handgun from Kane’s office. She shoots one of Miller’s gang, saving Kane. But Frank Miller remains, and he grabs Amy, using her as a shield to force Kane into the open.

Amy claws Miller’s face and he pushes her to the ground, giving Kane a clear shot. Kane takes it, and Miller drops to the street, dead.

Final Image: Kane helps Amy to her feet and they embrace. As the townspeople emerge and gather around them, Kane throws his marshal’s star in the dirt, glares at the crowd, and departs with Amy in their wagon.

Swimming with "the Pope in the Pool"

Naomi Beaty, a screenwriter and script reader in Los Angeles, teaches our online beat sheet screenwriting workshops, our in-person weekend intensive workshops, and hosts our STC! podcasts. Visit her online home and get access to the new library of downloadable screenplays and screenwriting resources.
View Calendar