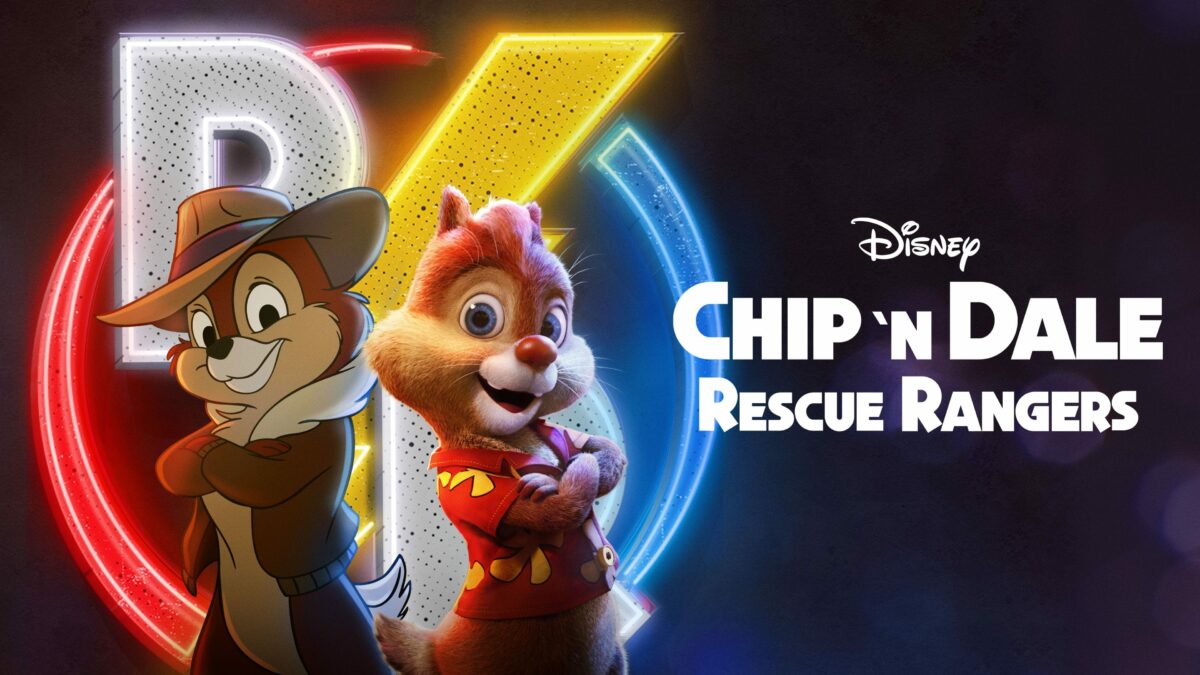 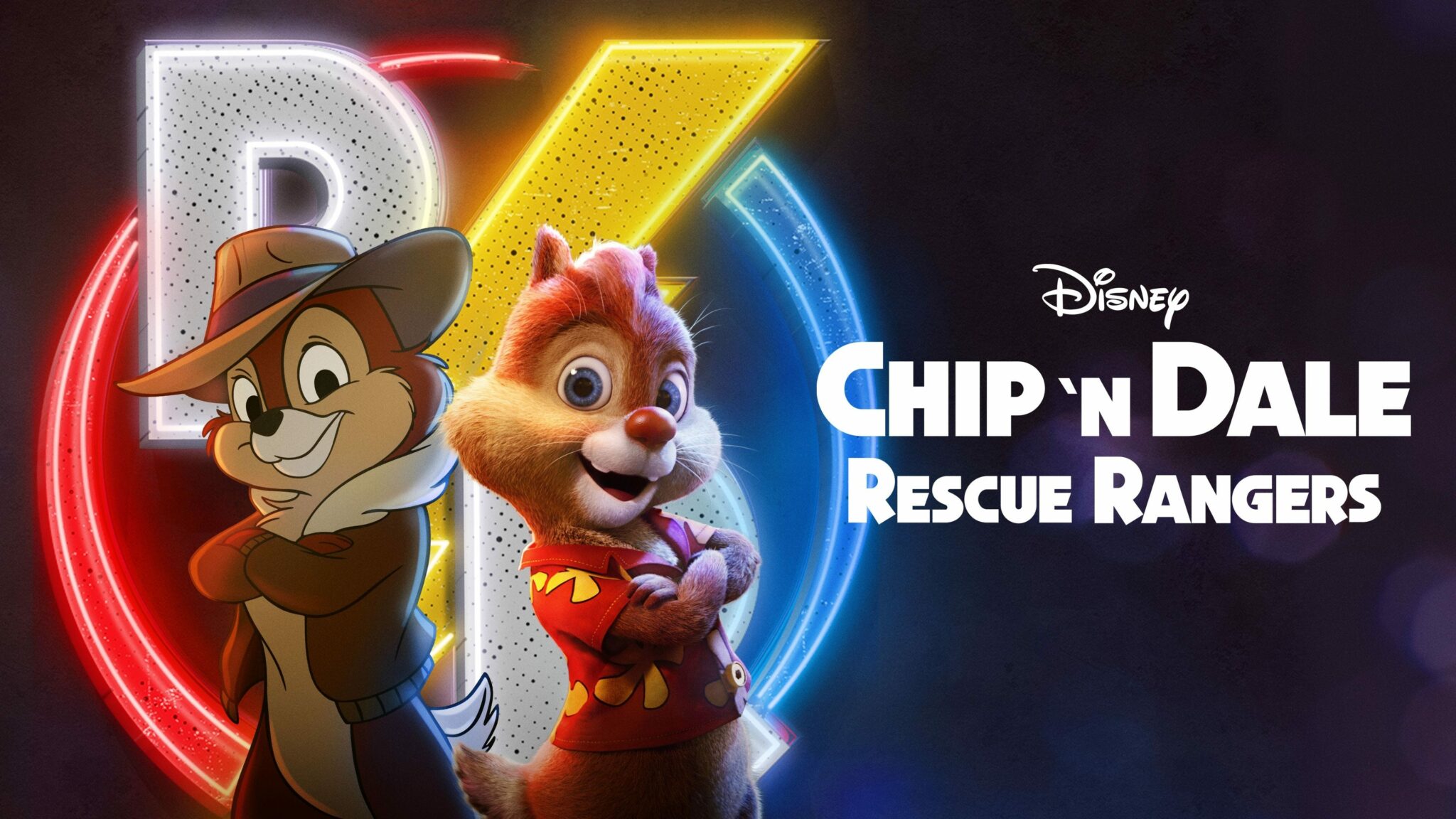 Opening Image: In 1982, we see a world where animated characters live with real humans as Dale (Andy Samberg) gets off the bus, ready to start third grade at a new school.

Set-Up: After a not-so-good introduction, his classmates think he is weird. Sitting alone at lunch, he’s eventually joined by Chip (John Mulaney).

Theme Stated: Although Dale thinks his introduction was a failure, Chip tells him, “The biggest risk is not taking any risk at all.”

Set-Up (continued): The two become best friends. They travel to California after high school, working together in the entertainment industry, ultimately finding success in the show Rescue Rangers. At a party celebrating the third season, Dale is down, reflecting his stasis=death status. He feels unfulfilled, like he is the “dumb one” of the duo, the second banana. Attempting to find success on his own, he tells Chip that he has signed onto a spy show, Double-O Dale.

Although he cites Chip’s advice about taking risks, the two have a falling out when Dale takes a call from his agent about the new show. Rescue Rangers is canceled that summer, with Double-O Dale scrapped after the pilot. In the present day, Dale has undergone a 3D CGI makeover, making appearances at fan conventions. Meanwhile, Chip sells insurance. Among the things that need fixing in their world, animated characters have gone missing.

Catalyst: Arriving home, Chip discovers a message on his landline from Monterey Jack, a former castmate on Rescue Rangers. Monterey Jack’s in trouble and could use help.

Debate: Chip visits a paranoid Monty who owes money to the Valley Gang. If he can’t pay up, they will bootleg him. The gang has been kidnapping and changing toons to get past copyright laws, smuggling them overseas to black-market studios to make bootlegged movies. Meanwhile, Dale also arrives, talking about a reboot of their old show. Chip wants nothing to do with it, still at odds with his former partner.

Later, Dale gets a call from the police: Monty’s been kidnapped. It’s a double-bump as he calls Chip. The two give a statement to police officer Putty, who tells them that Sweet Pete runs the Valley Gang, and there’s no hope of getting Monty back. Detective Ellie Steckler, a fan of the Rescue Rangers show, disagrees. She says bootlegging takes two days, and that Chip and Dale can find the operation without the red tape of warrants.

Break into Two: Chip forms a reluctant partnership with Dale, and the two begin to investigate.

B Story: Although they’ve known each other since third grade, the relationship between Chip and Dale will be the B Story, as they will both learn how much they need each other in this Buddy Love story.

Fun and Games: The promise of the premise is seen in the upside-down world as the two enter Main Street; it seems wholesome on the outside, but is a front for illegal activities. Visiting a cheese shop Monty bought from, they meet the owner, who takes them to Sweet Pete in the Uncanny Valley. There, Chip and Dale learn that Sweet Pete is actually an aged Peter Pan, who was ignored by the industry after he grew up, leading him to create bootleg movies of popular characters.

After noting that Pete wears a step tracker, the two escape and meet with Ellie to form a plan. Chip learns that Dale saved memorabilia from their Rescue Ranger days, and he begins to realize that maybe Dale still cared about their friendship after all. While the three formulate a plan to get information from Pete’s step tracker, Chip harbors suspicions about Ellie’s motives, wondering if she’s being entirely truthful about being a fan.

Midpoint: As Chip and Dale sneak into a Russian bathhouse to get Pete’s tracker, a snake corners them, recognizing them. He asks them to rap to a remix he created of the Disney Afternoon music. While Chip says it is too risky, Dale restates the theme, that the biggest risk is not taking any risk at all. Using the rapping as a distraction to get the tracker, the two find synchronicity, falling back into their old days as a duo.

As A and B Stories cross, Chip and Dale praise each other, with Dale stating, “We were always better together.” They share a brief false victory as they discover that Monty is being held at the San Pedro docks. Time clocks tick and the stakes are raised as they hurry to save their friend from being bootlegged.

Bad Guys Close In: As the police squad arrives at the dock, Captain Putty notes that the police just missed the bootleggers; someone on the inside had to have told them. As Chip and Dale investigate the bootlegging machine, it turns on. They escape, but Chip’s ear has been changed. External bad guys close in as they find pieces of characters that have been bootlegged, including Monty’s mustache. As the internal bad guys begin to foment, Chip and Dale argue, turning the conversation back to Dale’s abandonment with Double-O Dale.

In anger, Chip gives him a coin-like pog, the one piece of memorabilia he kept from the Rescue Ranger days. Dale admits that he only wanted to feel needed, but he didn’t want to leave the show. At the police station, suspicions mount as they smell Monty’s cologne and suspect Ellie. As the two try to find help at a fan convention, Sweet Pete and his gang show up and pursue the duo.

All Is Lost: When Chip is captured by one of Pete’s henchmen, all is lost for Dale. There’s a whiff of death for them, and as Ellie goes to rescue Chip, she’s stopped by Captain Putty; he’s been the informant for Pete’s gang all along.

Dark Night of the Soul: As Dale sorts through what he should do, he receives a call from Ellie, being held by Putty. Although he’s not sure if he can trust her, she tells him the name of her favorite episode as a message. Dale cracks the clue (albeit in a roundabout way), and takes a risk and seeks out former Rescue Rangers Gadget and Zipper for help.

Break into Three: Dale and his friends set out to rescue Chip and Ellie. He gets a call from his agent, but this time, he rejects it—his friends are more important.

Finale: As Dale storms the castle, he stops the bootlegging machine and saves Chip. The machine soon explodes, malfunctioning and transforming Pete into a composite of other villains. As Ellie stops Putty, Chip and Dale team up, using a tactic from an old episode to stop Pete. In a high tower surprise, Dale is shot, and Chip digs, deep down, forgetting his grudge and reminiscing about how scared he was at school until Dale showed up. He was afraid to reach out to Dale but knew that the biggest risk was not taking one… and that risk paid off in a lifelong friendship. He’s relieved to discover that Dale is saved by the pog Chip gave him, a symbol of their time together. They find Monty and the other toons, ending Sweet Pete’s operation.

Final Image: As the Rescue Rangers walk off into sunset as a team, they begin considering a reboot—because they were always better together.