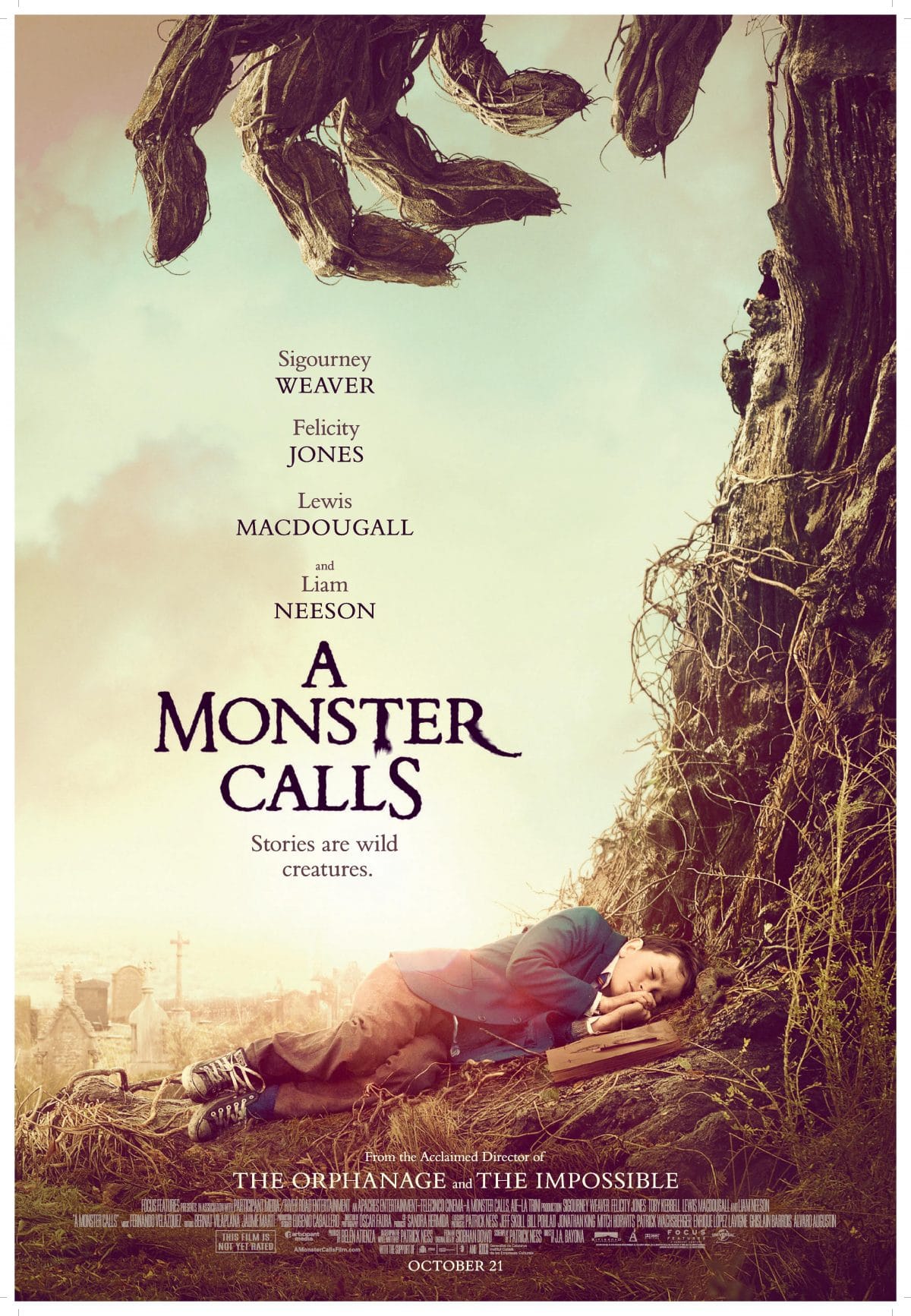 Written by: Patrick Ness; based on the novel by Patrick Ness and an original idea by Siobhan Dowd
Directed by: J.A. Bayona
Genre: Rites of Passage (Death Passage)

How does the story begin? It begins like so many stories: with a boy too old to be a kid, too young to be a man… and a nightmare.

Opening Image: Bathed in red light, Conor (Lewis MacDougall) experiences a nightmare where he holds on to his mom’s hand just before she slips into a deep crevasse. He wakes at 12:07 a.m.

Set-Up: Conor’s life is full of things that need fixing. Apart from taking care of his cancer-stricken mother (Felicity Jones), he is bullied at school and feels invisible. His mother tells Conor that while she undergoes another round of chemotherapy, his grandmother, with whom he has a shaky relationship, will be coming to stay with them. Alone, Conor immerses himself in his art. In his thesis world, dealing with the life problem of his mother’s illness is something he wants to avoid. But unless he faces it, it will mean Stasis = Death for him. Coming to terms with his mother’s inevitable passing forms the A Story.

Theme Stated: Conor’s mom tells him that people are afraid of what they don’t understand. Conor is afraid of his nightmare, and only by understanding it will he be able to move from the wrong way of dealing with his mom’s cancer to acceptance.

Debate: Conor is unsure of the source but discovers that it is coming from a yew tree on top of the hill in the graveyard near his home. The tree changes its form into that of a Monster and breaks into his house. The Monster declares that he will tell Conor three stories, after which Conor will tell him a fourth one: the truth, Conor’s truth. In the morning, Conor’s grandmother (Sigourney Weaver) arrives, creating tension and uncertainty when she tells him that they need to discuss the fact that Conor will need to come live with her eventually. But is this true? Conor believes his mom will get better with treatment; is he foolish to hold out hope?

Break into Two: At 12:07 that night, Conor sees the Monster outside his window.

B Story: Conor’s relationship with the Monster forms the “helper story.” Through the Monster’s tales, Conor will gain the wisdom needed to face his own truth.

Fun and Games: The Monster tells Conor the first story, one about a prince and an evil queen, the lesson being that most people are neither good nor bad, but somewhere in between. Conor wants to be saved from living with his grandmother, but the Monster tells him that it is not his grandmother that he needs saving from. In his antithesis world, Conor is forced to confront the fact that not everything makes sense as he would prefer.

Conor is beaten up by bullies at school, and his mom’s chemotherapy isn’t working. To make matters worse, he must stay at his grandmother’s house where he is forbidden to touch anything. His father visits from America, but Conor learns that he will not be able to go live with him. That night, the Monster returns at 12:07, recalling a time when he “went walking” that involved a conflict between a parson and an apothecary. In the story, the parson is punished for being faithless, his home and family ultimately destroyed by the Monster. As the Monster destroys the home in the story, Conor joins him, becoming part of the fantasy.

Midpoint: Conor feels exhilaration at destroying the home. As he releases his anger and frustration at his mother’s illness, the A Story crosses with the B Story in a false victory; Conor has begun to express his true emotion, a sort of “public coming out.” But not all is as it seems.

Bad Guys Close In: Conor emerges from the Monster’s tale to discover that he has destroyed his grandmother’s living room. She returns, speechless and in shock. Bad Guys, both internal and external, attack from all sides. Conor is wracked by guilt as he hears his grandmother weeping at night behind closed doors. His dad tries to have a heart-to-heart with him, but Conor only feels betrayed at the knowledge that his father must leave. He is bullied at school, causing him to withdraw more.

At the hospital, his mom tells him about a new medicine the doctors will try, one made from a yew tree. Conor is hopeful about this last-ditch effort and confronts the Monster, who says Conor is not ready for the third tale. Days pass, and when the bully at school decides to treat Conor as nonexistent, the Monster returns to tell Conor the third tale, one about an invisible man who wished to be seen. With help from the Monster, Conor makes himself visible, pummeling the bully.

All Is Lost: That day, Conor is taken to the hospital, learning that his mom is worse off than before and that the treatments aren’t working. Although he faces the whiff of death, he is still not ready to accept the truth.

Dark Night of the Soul: Back at his house, Conor goes to the graveyard to confront the yew tree, demanding that the Monster appear, angry that his mom hasn’t been healed. But the Monster reveals that he came to heal Conor, and it is through speaking the truth that Conor will find healing and acceptance.

Break Into Three: Now, Conor must tell the fourth story, his synthesis world of story and reality merging as A and B Stories meet.

Finale: Suddenly, Conor’s nightmare becomes real. He finds himself grasping his mom’s hand to keep her from falling; the Monster demands that Conor speak the truth he is too afraid to admit — only by doing so will he understand the nightmare. Finally, after letting his mom fall into the abyss, he digs, deep down and admits that he did so because he can’t stand the pain and wants it to be over. The Monster consoles him, and Conor falls asleep, only to be found by his grandmother at the foot of the yew tree. She rushes him to the hospital, where he finally finds acceptance with his mom’s death and with himself.

Final Image: At his grandmother’s house, Conor is shown his new room: his mother’s childhood room, still full of her art. With a smile, he looks at a picture she drew, one with a little girl… and the Monster.

How does the fourth story end? It ends with a boy holding tight to his mother. And by doing so, he can finally let her go.