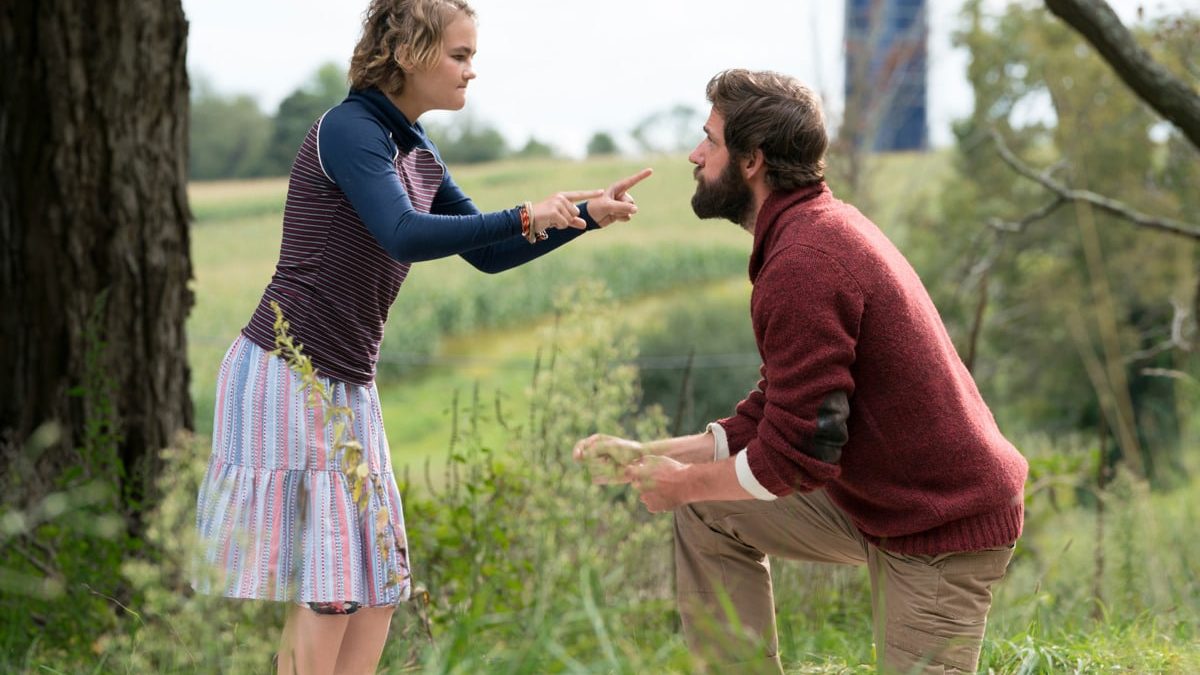 In A Quiet Place, John Krasinski attempts to protect his deaf child, Millicent Simmonds, from the monstrous threat with another makeshift hearing aid, which is the B Story.

As I’ve written these monthly “Monster in the House” beat sheets for classic and contemporary horror films, I’ve noticed a pattern of story beats that elevates the memorable movies from the not-so-memorable, the financially successful from the not-so-successful. These specific beats, I’ve observed, offer a horror film more than obligatory scares—they enrich it with a deeper story meaning and emotional resonance.

Films like Get Out, IT, An American Werewolf in London, and even The Shining (even more so in the Stephen King book), share a similarity that has made them financial successes as well as critically and audience-acclaimed classics. (You can access the full beat sheets on the title links.)

What is this shared similarity? It’s the B Story. Each of the aforementioned films, which bring on the scares in the A Story, are bound by friendship in the B Story. Even the recent runaway success of A Quiet Place has a strong B Story that drives the theme: Can we protect our children?

Traditionally the “love story,” the B Story is where the discussion and dramatization of the theme of any good movie, horror or not, is found. The B Story assists the Theme Stated beat in Act One; it’s the “helper” story that drives the theme. It’s the internal glue that holds all the A Story pieces together. Without Theme Stated and the B Story that dramatizes it, a film’s narrative is hollow and without meaning.

Let’s look at a few of the aforementioned films.

In the recent commercially and critically acclaimed hit, A Quiet Place, where monstrous alien creatures are attracted to sound, a family in an upstate New York farm must try to survive. Survival, of course, is what every scene is about, survival by trying to live a quiet existence without making a sound—which can literally bring the monsters onto your front doorstop.

As previously mentioned, the theme is: Can we protect our children? This is dramatized by John Krasinski making hearing aids for his hearing-impaired daughter so she can listen—and survive. This is what gives the film, which could have simply have been a thrill-a-minute shocker, emotional gravity. We can relate because we all have somebody we would protect with our lives. It’s what makes us human, or at least the best kinds of humans.

In the recent film adaptation of Stephen King’s IT, a town is relentlessly haunted by a shapeshifting entity that often takes the form of Pennywise the Dancing Clown. Every 27 years, the monster rises from the sewers of Derry, Maine and preys upon the town’s children.

In one scene, one of the teens that Pennywise targets, Mike Hanlon, works on his grandfather’s sheep ranch. He’s told to kill a sheep with a pneumatic captive bolt pistol. Mike can’t do it. His stern grandfather tells the boy “There are two places you can be in this world. You can be out here, like us, or you can be in there, like them [the sheep]. You waste time hemming and hawing and someone else is gonna make that choice for you. Except you won’t know it, until you feel that bolt between your eyes.”

That’s the Theme Stated moment early in Act One. The B Story is the friendship of what will be known as the “Lucky Seven,” the unlikely alliance of kids who decide that they’re stronger as a group, a herd, than being lone “sheep.” The friends give themselves a better chance at survival than what life has dealt them. That’s the message which has made the story memorable (beginning with the 1986 Stephen King book and a 1990 TV adaptation).

In the recent, Oscar-winning screenplay Get Out, Chris Washington is leaving the safety of the city with his white girlfriend for a weekend in the country to meet her parents. Chris is a little nervous and ignores the warning signs of his friend, TSA Officer Rod Williams. Rod brings the grim story humor as he shares his “conspiracy theories” of what will happen to his friend around a bunch of rich, white people. Of course, these theories have a grain of truth that Chris learns too late. It’s the friendship of Chris and Rod, the B Story, which really gives the film its heart and humor, and its eponymous message—get out.

In Stanley Kubrick’s The Shining, Danny, the young son of Jack and Wendy Torrance, who are hired as winter caretakers of The Overlook Hotel, has a special power to see visions of the future and the past—terrifying visions. The grand hotel, isolated in the Colorado Rockies, has a lengthy history of corruption and violence and many literal ghosts of the past. The B Story is the friendship between the head chef of the hotel and the boy. Dick Hallorann warns Danny not to mess with things he shouldn’t, which echoes the theme of the past can come back to haunt you. This friendship (which is better developed in the novel) is the heart of the story, and, of course, its title.

Finally, in An American Werewolf in London, David Kessler and Jack Goodman decide to backpack across Europe. Their first stop is their last one—they’re attacked by a werewolf under the cold light of the full moon in the moors. Jack is killed and David is bitten, but survives. The rule goes that whoever is attacked by a werewolf and lives, becomes a wolf at the next full moon. Jack, bound by the werewolf’s curse, returns from the grave to warn his friend and to try to help him end his suffering. It’s the heart of the story, as much of the film’s humor is derived from these exchanges, as well as David’s romance with a London nurse, Alex Price, who also helps him. Can love overcome the beast in us?

All right, those were some examples. Now, here are some guidelines to help conjure good Theme Stated/B Story beats in your writing:

1. What is the Theme of your story? What’s the reason you want to tell it? What’s the message you’re trying to convey? Sometimes you don’t know until you’ve written the first draft. That’s OK and perfectly natural. The sooner you can find your theme and dramatize it through the B Story, however, the better.

2. Is the B Story relatable? Think about A Quiet Place. The theme is can we protect our children and it’s dramatized by John Krasinski toiling over hearing aids so he can protect his hearing-impaired daughter in this silent world. The theme is not only ironic, it’s primal and it’s relatable: protecting those who we love makes us human.

3. A good B Story also adds a counterpoint to the narrative. Look at the examples of An American Werewolf in London and Get Out. They each added an element of humor to a grim and unrelenting subject. Humor not only helps us bond to the characters with a laugh—in a horror film, it also eases off the terror so the next “monster moment” can be even scarier.

From Blake's Blogs: The Shard of Glass