About the Beats, Genre

Final Draft and Save the Cat!® Team Up to Inspire Writers 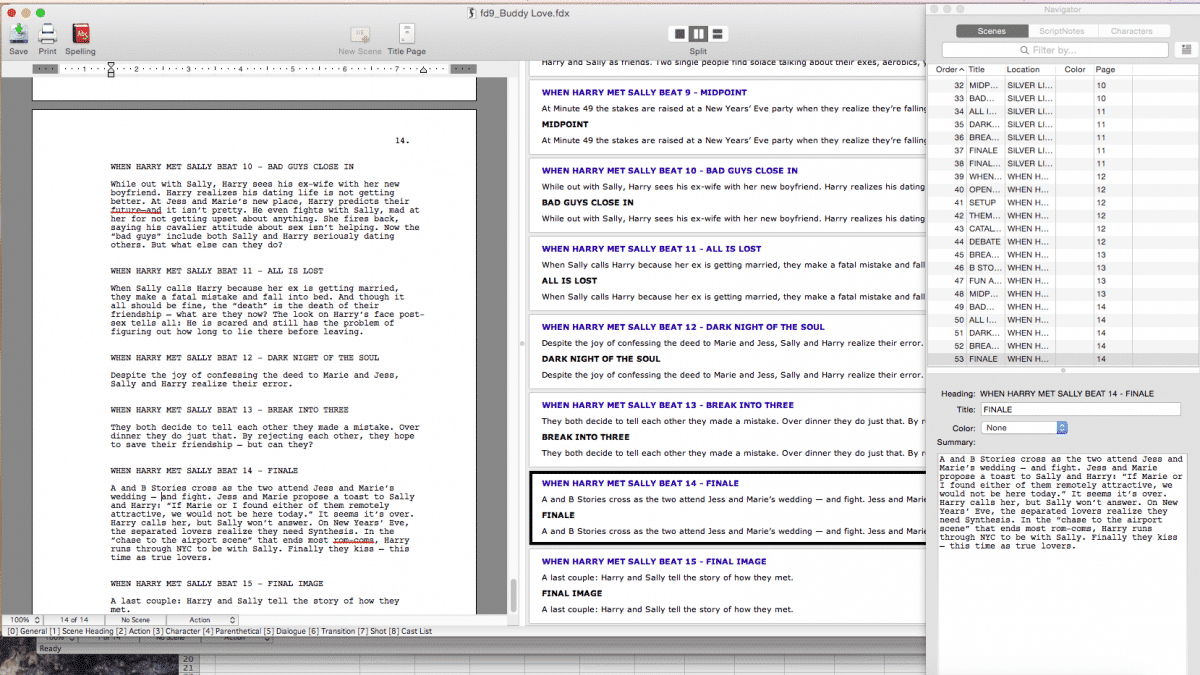 A message — and Special Offer — from our friends at Final Draft:

Nothing is more intimidating than a blinking cursor on a blank page. Final Draft may have made formatting easy, but writers still have to provide the brilliant story lines.

Over the years, Final Draft customers have said again and again that Save the Cat! Beat Sheets help them organize their script ideas into an accessible structure and move past the blank page. We listened, and collaborated with the Save the Cat! team to create templates that allow writers to start brainstorming from within Final Draft, then move seamlessly to a script file.

Save the Cat! and Final Draft have created 10 great templates you can use to jump start and develop your screenplay ideas.

Writers pick the genre most closely suited to their idea and use the beat sheet template to break down the three-act structure into bite-size, manageable sections, each with a specific goal for the overall story. As a bonus, the templates give you examples from three different movies to get you inspired.

You can choose from any of Blake Snyder’s 10 genres:

Monster in the House
Primary components: Monster, House, Sin
A culpable hero is forced to save a trapped group of people from being killed by a monster he inadvertently unleashed.
Movie examples: Saw, The Babadook, Jaws

Golden Fleece
Primary components: Road, Team, Prize
A driven hero must lead a group of allies to retrieve a prized possession through a perilous journey that wasn’t what the hero expected.
Movie examples: Argo, Raiders of the Lost Ark, Saving Private Ryan

Out of the Bottle
Primary components: Wish, Spell, Lesson
A covetous hero must learn to undo a spell he wished for before it turns into a curse he can’t undo.
Movie examples: Eternal Sunshine of the Spotless Mind, Midnight in Paris, Liar Liar

Dude with a Problem
Primary components: Innocent Hero, Sudden Event, Life or Death
An unwitting hero must survive at all costs when he is dragged into a life or death situation he never saw coming and cannot escape.
Movie examples: Die Hard, Gravity, The Lego Movie

Buddy Love
Primary components: Incomplete Hero, Counterpart, Complication
An inadequate hero must rise above an extremely difficult situation to be with a uniquely unlikely partner who is the only one capable of bringing him peace.
Movie examples: Frozen, Silver Linings Playbook, When Harry Met Sally

Whydunit
Primary components: Detective, Secret, Dark Turn
A single-minded hero must find the truth to a mystery so intriguing before he is swallowed by the darkness he desperately seeks to expose.
Movie examples: All the President’s Men, Body Heat, The Conversation

Fool Triumphant
Primary components: Fool, Establishment, Transmutation
An innocent hero’s only way to defeat the prejudices of a group is to change himself without losing what made him the group’s target of disdain in the first place – his uniqueness.
Movie examples: Elf, The King’s Speech, The 40 Year Old Virgin

Institutionalized
Primary components: Group, Choice, Sacrifice
An outsider’s only way to save his individuality is by going against the many who wish to integrate him into their fold.
Movie examples: American Sniper, Avatar, Do the Right Thing

Superhero
Primary components: Special Power, Nemesis, Curse
A uniquely special hero must defeat an opponent with stronger capabilities by using the same powers that disconnect him from the people he hopes to save.
Movie examples: The Avengers, Raging Bull, Ratatouille

Within each Save the Cat! genre template you will find find Blake’s 15 beats. You probably already know that these beats are important scenes or sequences that typically occur near the same place in every script or movie. You can read through the three movie examples for inspiration, and then use the genre beat guide to map out your own story. To create your own story using the beats, simply use Scene View, Scene Navigator, and/or Index Card View within Final Draft 9 to replace these beats with your own scenes and scene summaries.

Best of all, these 10 templates, complete with examples from well-known films, are free to registered Final Draft users. Just visit our downloads site to get the genre templates that interest you. Don’t have Final Draft? Don’t worry. Final Draft is on sale now through Monday, June 8, at 30% off, no coupon needed. We’ve extended the savings just for Save the Cat! readers. Use coupon code CATFD15 here to save 30% off Final Draft products through June 19th!

Save the Cat!® Podcast: Blake Snyder on Theme Stated and the Beats of Blank Check

First Look at the Cover of J.J. Austrian's Book!