The Day of the Doctor Beat Sheet 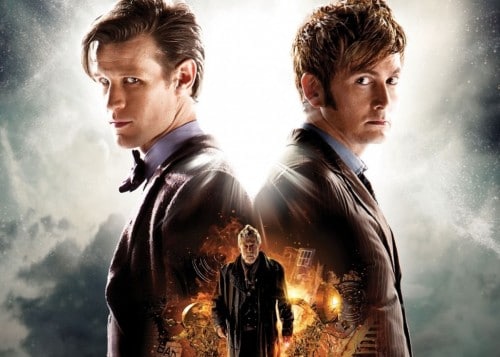 The Day of the Doctor aired on November 23, 2013, 50 years to the day of the first episode. It has largely been hailed as perhaps the greatest episode of the series. The plot is complex, following the Eleventh Doctor (hereafter referred to as the Doctor) and two of his previous incarnations, the War Doctor and the Tenth Doctor. Because the story deals with time travel, it can be a bit “wibbly-wobbly, timey-wimey” at times, but it all comes together in the end, a brilliant example of plotting at its best, hitting all of the beats.

Opening Image: In 2013, a policeman walks past 76 Totter’s Lane and the Coal Hill Secondary School, a callback to the opening image of the first episode 50 years ago.

Theme Stated: The Doctor’s companion, Clara Oswald (Jenna Coleman), quotes Marcus Aurelius as she teaches her class: “Waste no time arguing about what a good man should be. Be one.”

Set-Up: Clara goes to meet the Doctor (Matt Smith), but their reunion is cut short as the Doctor’s police box, the TARDIS, is picked up by a helicopter. Cate Lethbridge-Stewart of UNIT (Unified Intelligence Task Force) calls and reveals that the TARDIS is being brought to the National Gallery. Upon arrival, the Doctor finds sealed orders from Queen Elizabeth I that lead him to a painting of the fall of Arcadia, a city on his home planet of Gallifrey. The painting, alternately titled “No More” and “Gallifrey Falls,” is a 3D oil painting based on Time Lord technology, bigger on the inside and capturing a slice of real time.

The Doctor reveals that the image depicts the last day of the great Time War between the Time Lords and the Daleks, and featured a past incarnation of himself that he had tried to keep secret due to what he did on that day. In his thesis world, the Doctor is ashamed of the choice he made, the life problem in this rites of passage story.

Catalyst: Viewing the painting triggers memories of the darkest day in the Doctor’s life. In a flashback to that day, the Doctor of the Time War (the War Doctor, played by John Hurt) uses a gun to blast the message “No More” on a wall during a battle with the Daleks. The Gallifrey generals see the message and question it, only to learn that the War Doctor has breached the Time Vaults and has stolen the last remaining weapon from the Omega Arsenal. This weapon, known as The Moment, is a “galaxy eater,” and became so powerful that it developed its own conscience. Alone, the War Doctor takes The Moment to a remote house. There, he will use it to end the Time War.

Debate: The Moment’s conscience appears to the War Doctor in the form of a woman, his future companion Rose Tyler (Billie Piper). The War Doctor tells her that he plans to end the suffering in the only way he can, by killing all of the Gallifreyans and Daleks. As a consequence, he will live on to remember the act. Just then, a time fissure opens and a fez mysteriously flies through.

Back in 2013, the Doctor reveals that his previous incarnation had a relationship with Queen Elizabeth I and was made curator of the Undergallery, a place where art that has been deemed too dangerous for public consumption is stored. A flashback to 1562 London shows the Tenth Doctor (David Tennant) trying to accuse the Queen of being a Zygon, a shape-shifting alien that can take the form of any human and be his or her double. However, the Zygon is revealed to have taken the form of their horse, and the alien chases the Queen through the woods, taking her form. As the Tenth Doctor searches for her, a time fissure opens and a fez comes flying through it.

In 2013 at the Undergallery, the Doctor and Clara examine stone dust that is found on the floor, and he asks UNIT employees to analyze it. Passing a fez in a glass case, he takes it, and they arrive at a set of Gallifreyan oil paintings, each preserving a slice of time. However, the glass has been broken from the inside, meaning that something has come out of them. A time fissure opens in the museum, and the Doctor tosses the fez through it before jumping into it.

Break into Two: The Doctor now meets the Tenth Doctor, and their encounter will play a large role in his past and future.

B Story: The B Story focuses on the Doctor coming to terms with what his past self, the War Doctor, chose to do on that last day of the Time War. Through his relationship with his past self, he will learn if he is a good man or not.

Fun and Games: The two Doctors meet in 1562. The Doctor invites Clara to join them, tossing the fez through the fissure to show her it is possible. The fez, however, doesn’t make it to Clara, having gone to someone else. This someone soon comes through the portal: the War Doctor. The other two are apprehensive at seeing their past incarnation, the one they had kept secret because of his unforgiveable deed. This is the Doctor’s antithesis world, in which he encounters his past self who has not yet made the horrible choice. He will also travel down the path of the wrong way, trying to forget what he had done rather than come to terms with it and how it has shaped him.

Soldiers from the Queen arrive to arrest them, and they are taken to the Tower of London. The Doctor relishes this prospect because UNIT’s Black Archive is in the present-day Tower. He takes the opportunity to carve information into a pillar for them to find in 2013.

In 2013, the UNIT employees realize that the dust they were analyzing is from smashed statues, allowing the Zygons to hide where the covered statues once stood. The Zygons take the forms of Cate Lethbridge-Stewart and other UNIT employees and escort Clara to the Black Archive, where powerful alien technology is hidden. It is a place that the Doctor’s TARDIS can never enter, and employees’ memories are erased after every shift. Cate and her UNIT associates are revealed to be Zygons in disguise, and Clara escapes with a vortex manipulator using the activation code the Doctor had carved into the stone.

In 1562, the Doctor discusses the Time War and his regret for having used The Moment, revealing that he had counted all 2.47 billion children that died because of him. The War Doctor can see the conscience of The Moment, who reveals that the Tenth and Eleventh Doctors are who he will become if he destroys Gallifrey.

Midpoint: A false victory occurs as the Doctors work together to figure out a way to escape. By overcoming their differences, the Doctor is beginning to come to terms with his identity, both past and present.

Bad Guys Close In: Clara arrives in 1562, and Queen Elizabeth shows up to reveal the Zygons’ plan. The Doctor isn’t sure if she is the real Queen or a Zygon double, but she proves that she is the original, falsely leading the Zygons along until she knew their intent. The alien race had lost its planet during the Time War, and they will use Gallifreyan stasis cubes to freeze themselves in Time Lord art until 2013, when Earth is more suitable for them. By putting themselves in suspended animation, they can invade the future from the past.

The Doctors know that they must find a way into the Black Archive in 2013; otherwise, the Zygon invaders will have access to all of the alien technology, allowing them to conquer the world in a day. However, the bad guys continue to close in for the Doctor; the Black Archive is TARDIS-proof, and the real Cate Stewart confronts her Zygon double, initiating a countdown clock that will detonate a nuclear warhead that rests beneath London.

Using special technology, the Doctor speaks to her from his TARDIS, trying to persuade her to stop her actions. The Doctor comes up with a plan, using the stasis cube to preserve the four of them in the “Gallifrey Falls” Time Lord painting, and then contacts a UNIT employee from the past to have it delivered to and stored in the Black Archive.

Arriving through the painting, the three Doctors initiate a negotiation between the Zygons and humans, using the memory-wiping technology so that neither side knows who they are. The countdown is stopped, but as Clara talks to the War Doctor, she realizes that he still intends to use The Moment, justifying it because of all the great things it has caused his future self to do.

All Is Lost: The War Doctor is transported by the conscience of The Moment to the house he started at. He stares at the device, ready to use it. The whiff of death hangs in the air as he faces the fact that he will end two races with this one decision. “Great men are forged in fire,” he says, recalling his future incarnations. “It is the privilege of lesser men to light the flame.”

Dark Night of the Soul: The Tenth and Eleventh Doctors arrive in their TARDISes, joining the War Doctor. They have come to terms with the past and demonstrate their acceptance by joining him so that he doesn’t have to do this alone. Clara tries to talk them out of it, reminding them of the name they chose: the Doctor, which has led him to be a good man.

Break into Three: The Doctor enters his synthesis world, one where he realizes that he is a good man after all. And being a good man, the Doctor decides that they must change history.

Finale: Using the stasis technology, they will make the planet Gallifrey disappear, hiding it in a single moment of time in a pocket universe. However, it will appear that the planet is destroyed. He reveals the plan to the Gallifreyan generals in the Time War, and he has recruited all of his past incarnations to perform the calculations needed for this action, making the result seem instantaneous. The Doctors and the TARDISes surround Gallifrey in the last day of the Time War, and as planet disappears, the Daleks destroy themselves in the crossfire.

The Doctors and Clara return to the National Gallery, unsure if their plan has succeeded. The War Doctor and Tenth Doctor realize that they will not remember saving Gallifrey due to the time streams being out of sync. After they bid each other farewell, the Doctor meets the Gallery’s Curator, a man who might possibly be a future incarnation of himself. The Curator reveals that the painting is actually called “Gallifrey Falls No More” and is an indication that the planet is safe.

Final Image: The Doctor stands outside his TARDIS with images of his past incarnations, now filled with the hope of finding his home.

Save the Cat!® Podcast: Blake Snyder on Your Pitch and Logline