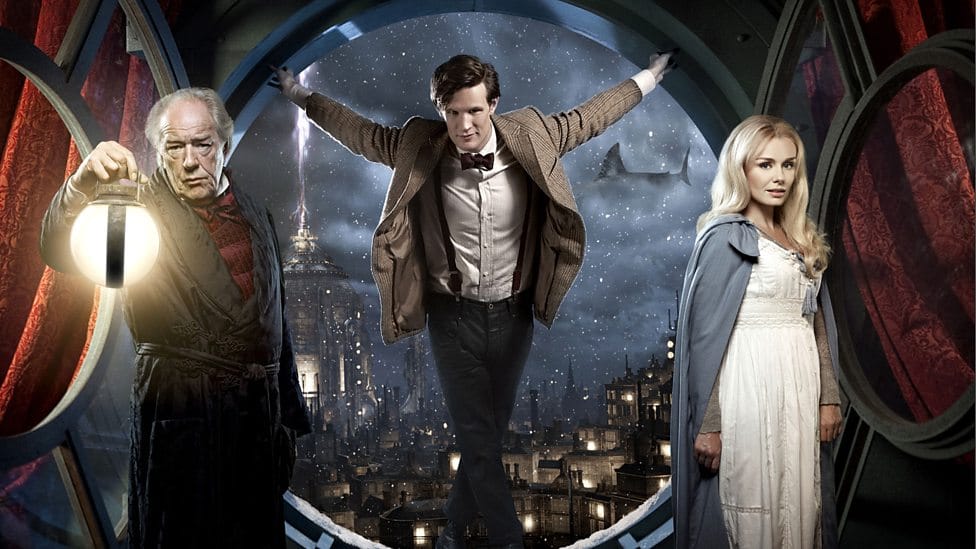 Written by: Steven Moffat
Directed by: Toby Haynes
Genre: Out of the Bottle

Opening Image: In space, lightning-filled clouds surround a planet as a spaceship hurtles toward it, utter chaos in the sky.

Set-Up: The Doctor’s companions, Amy and Rory Pond (Karen Gillan & Arthur Darvill), are on the cruise ship for their honeymoon. Using the ship’s distress signal, they attempt to call the Doctor.

On the planet below, in Sardicktown, a spire shoots a beam into the sky above. It’s Christmas Eve, and miserly Kazran Sardick (Michael Gambon) listens to a family’s request to have a woman (Katherine Jenkins) released from cryostasis for the holiday. Kazran refuses, citing that she is “security” for a loan the family took out long ago, and says that Christmas is nothing more than the midpoint of winter, a time when people seem to congratulate each other for being “halfway out of the dark.” The president calls, pleading for Kazran to shut off the beam and allow the ship with over 4,000 passengers to land safely. Uncaring, Kazran refuses any aid, for he runs the planet. In his thesis world, he is in control, and this means Stasis=Death, and not only for the souls above. Things need fixing in his life, and if he doesn’t change, it will mean the death of his own humanity.

Soon, the Doctor (Matt Smith) comes down the chimney; he realizes the clouds are made of ice crystals that are controlled by the spire. The controls are isomorphic, meaning they only respond to Kazran, who refuses to perform the simple act of turning it off.

Theme Stated: The Doctor notices the woman, frozen in the cryo cylinder, and asks who she is. When Kazran says that she’s of no importance, the Doctor replies, “900 years of time and space, and I’ve never met anyone who was wasn’t important.” Can one individual, even a scrooge like Kazran Sardick, make a difference in the lives of others?

Catalyst: After pleading for the lives of the people on board the ship, the Doctor tells Kazran, “Whatever happens, remember: you brought it on yourself.” Kazran’s refusal to help becomes an unwanted wish, one that the Doctor will fulfill.

Debate: As the Doctor contacts Amy aboard the ship, he notices that fish come through the cloud layer and swim in the fog. When she asks how he will save them, a Christmas carol sounds through the air, giving the Doctor an idea.

That night, Kazran sits alone, when a black and white video suddenly projects itself on his wall, displaying footage of his younger self talking to the camera about the fish. The elderly Kazran watches while his father enters the room and berates his young self, hitting him. When the Doctor appears, Kazran asks him who he is. “Tonight,” the Doctor answers, “I’m the ghost of Christmas past.” The spell is about to begin.

Break into Two: The Doctor enters the TARDIS and materializes in the video from the past, right before Kazran’s eyes. He explains that Kazran’s memories will now change, creating Kazran’s antithesis world.

Fun and Games: In the past, the Doctor meets young Kazran while his older self watches, the memories beginning to alter. The Doctor uses his sonic screwdriver to lure a fish, but a shark attacks, eating half of the screwdriver before the Doctor stuns it. As the Doctor talks with young Kazran, he learns that the fog carries an electrical current, but the boy is more worried about the survival of the shark. The only way to get it back to the sky alive is with a life-support device: a cryo cylinder like the one Kazran’s father uses for his subjects. Kazran takes him to the room where his father keeps the frozen “surplus population.”

B Story: Kazran takes the Doctor to the cryo cylinder of the woman from the beginning of the story. “Important, is she?” the Doctor inquires, learning that Kazran has seen her video testimony, where she reveals her love of the fish.

Fun and Games (continued): When the Doctor’s sonic screwdriver begins signaling to its other half, trying to repair itself, he knows the shark is near. The two run, but are soon greeted by the sound of heavenly singing: the woman from the cylinder has been released, and her voice has tamed the shark. The Doctor realizes a specific frequency is what vibrates the ice crystals above, and this is how the machine controls the cloud belt. The Doctor takes young Kazran and the woman, Abigail, aboard the TARDIS to release the shark into the sky. As they return Abigail to the cylinder, Kazran notices the number “8” on it, wondering what it means. Saying goodbye, he promises that he and the Doctor will visit her every Christmas Eve, and the number ticks down.

Midpoint: The three celebrate many Christmas Eves together as Kazran grows older, including one on a shark-pulled sleigh. It’s a false victory for the Doctor, because it appears that Kazran is changing through his time with Abigail, A and B Stories crossing. But time clocks appear as the Christmas Eves go on, the cylinder’s number lowering to “3.”

Bad Guys Close In: Kazran, now older, visits Abigail for another Christmas Eve. This time, she doesn’t want to go through time and space, but prefers to stay in the current night. The three watch Abigail’s family from outside, with Abigail realizing it’s a life she can never have. The Doctor goes inside their home and invites Abigail and Kazran inside, and they spend a happy Christmas together.

One year later, during his annual visit, Kazran learns the truth from Abigail. Her bad guys are catching up to her, and as Kazran says goodnight to her once more, the counter turning to “1,” his internal bad guys manifest; he tells the Doctor that he wants to end the Christmas Eve visits. Kazran celebrates with his father on the completion of the machine that controls the cloud belt.
Back in the present, the old Kazran has not changed. A hologram of Amy appears, the “ghost of Christmas present,” and she shows Kazran holograms of all the people on the ship who will die because of him.

They sing “Silent Night,” hoping to use their voices to vibrate the ice crystals in the sky. Kazran is upset; the Doctor changed his whole life; previously, he never would have known Abigail and the pain it brought.

All Is Lost: Kazran reveals that Abigail had gone into the cylinder while ill, and she has used up her time. The whiff of death is obvious when he reveals she would live a single day if he released her. “How do I choose which day?” he asks.

Dark Night of the Soul: The Doctor appears and apologizes. Back in the room with the cryo cylinders, he tells Kazran that he will now reveal the man’s future. Kazran angrily explodes, saying that he will let the passengers die because he doesn’t care, and then taunts the Doctor to show him the future. “I am showing it to you,” the Doctor replies. “I’m showing it to you right now.” He steps aside to reveal young Kazran, asking him, “Is this who you want to become?” The young boy believes he is seeing his abusive father, which sends elderly Kazran into a fit of rage before collapsing into tears.

Break into Three: Kazran knows he must change and help those in danger, and he enters his synthesis world, signaling the fulfillment of the wish.

Finale: He tries to turn the machine off, but in a high tower surprise, the isomorphic controls don’t work; he has changed too much from the man his father had raised him to be. The Doctor wants to use the broken sonic screwdriver to reach the cloud belt, but this time, he wants to transmit something else, something bigger… something that they know resonates at the perfect frequency. They need Abigail to sing. Digging, deep down, Kazran opens Abigail’s chamber, A and B Stories fully uniting. With love in her eyes, she tells him, “We’ve had so many Christmas Eves; it’s time for Christmas Day.” Holding Kazran’s hand, she sings, her voice amplified, and it calms the cloud layer, even “unlocking” the ice crystals so that it snows for the first time in a long time.

Final Image: The Doctor enters the TARDIS and whispers, “Halfway out of the dark,” as Kazran and Abigail fly overhead in a shark-led sleigh, the skies now calm at Christmas.